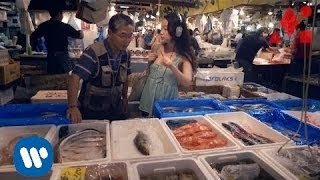 It seemed at many times throughout 2014 that pop went completely bonkers; Cheryl Cole/Fernandez-Versini/Just Cheryl became the first female to claim 5 solo number one singles (sorry, Nadine), former Nickelodeon crooner Ariana Grande transformed into one of the year’s best popstars, Tove Lo and Charli XCX somehow scored international hit singles and everyone’s favourite ex-country bumpkin, Taylor Swift, completed her pop metamorphosis and popped out of the cocoon with an iconic single and the year’s best album.

But throughout all that madness, we had some rather good singles that were released. Obviously 2 years ago there were just 21 good singles, last year there were 30 and this year there’s 40. Is pop getting better?

Or is it just harder to whittle down a list of songs?

We may never know.

40. Uptight Downtown – La Roux
After taking half a decade off to record an album consisting of 9 songs, surprisingly not that many people really cared when La Roux, now just former front woman Elly Jackson, have jettisoned previous producer Ben Langmaid and returned this year. This was probably because she didn’t come storming back with another ‘Bulletproof’, but this pleasant trip to funky town inspired by the London Riots was cruelly ignored and reached a fantastic chart peak of 146.

39. Rather Be – Clean Bandit feat. Jess Glynne
Classic-pop innovators Clean Bandit seemingly appeared out of nowhere with this literal smash hit earlier this year, led by the dulcet tones of flame haired chanteuse Jess Glynne, whose own solo debut single’ Rather Be’ had the two best opening lines of any song this year and went decidedly downhill from there. Its commercial over-saturation may have wiped some of the glow off of this song, but it’s still pretty jolly to listen here.

38. What Are You Waiting For? – The Saturdays
Not that you cared, but Britain’s best girlband (now that Girls Aloud have properly disbanded, sigh) celebrated their ‘greatest hits’ this year. We have a sneaking suspicious that last year’s no 1 ‘What About Us’ will be their only number one, but this Xenomania-produced tune shows that while, for now, The Sats should probably stick together, at least for poor old Vanessa’s sake.

37. Amnesia – 5 Seconds of Summer
This depressing fangirl epidemic reached DEFCON-2 levels this year, with seemingly talentless and genuinely boring YouTube stars brought to the brink of stardom by passive teenage girls having their minds twisted with their own insecurities and the hope of a feeling of belonging online. This is, of course, a sign of the end of days but 5 Seconds of Summer are one such online fan-girl success story that proves that some music are not just for the fangirls, like this heart-felt guitar-led weepy.

36. I Don’t Care – Cheryl
The single that made Our Chezza a record-breaking popstar. It’s far from her best single and that album chart placing wasn’t very good, so while the steam slowly runs out of the SS Fernandez-Versini , enjoy this swear-fest.

35. West Coast – Lana Del Rey
Lana Del Rey returned this year with her stripped-down and hypnotic opus, Ultraviolence. Similarly hypnotic were the guitar loops cycling over and over again on this, its lead single. Not as much of a world-conquering suckerpunch as we were expecting, you still get the feeling that, for now, this is as mainstream as Lana gets.

34. Habits – Tove Lo
This is a lovely, haunting song. Tove Lo seems like a lovely, talented, haunting woman. Still, the success of the ‘Hippie Sabotage’ remix over here and the actual success of the original song in the US is still somewhat baffling, it’s good to know that sometimes, pop just works.

33. Walk This Way – MO
This is a song you can strut to. MO didn’t really blow up this year, and she under-whelmed on her Iggy Igz collaboration, so for now this is the only sign of her greatness.

32. Crazy Stupid Love – Cheryl feat. Tinie Tempah
When we first heard this, we thought Chezza had completely lost the plot and dumped the demo to her single onto the inter-web. When, weeks and months later, the song still survived and was not pulled and replaced with a new, shinier offering, we guessed she had just forgotten, what with getting married and all. But still, we came to love its charm and Tinie Tempah serves up his best rap in years.

31. Tough Love – Jessie Ware
This and Jessie Ware’s gorgeous second album of the same name came and went with very little fuss this year, but it’s yet another accomplished neo-soul pop track from Ware. Almost, really, too good to ever succeed.

30. Crying For No Reason – Katy B
Katy B ‘scored’ her first ever UK number one album with her sophomore effort, Little Red, this year. And this UK Top 5 hit was the undeniable high point. A gorgeous song, a paint-by-numbers guide on how to build the perfect modern ballad.

29. Stay With Me – Sam Smith
We’ll be honest, we’ve only listened to this song by ourselves 3 times. We’ve heard it to death on the radio, but this is a song to be heard intimately. And we can’t listen to it more than 3 times, we don’t want the chills we get to ever wear off. This is a very, very special song.

28. Fancy – Iggy Azalea feat. Charli XCX
The song that, somehow, finally, brought both Iggy and former goth Charli XCX to the top of the charts. The song is, of course, a banger and its video is one of the year’s best and most stylistically iconic. Iggy’s best rap in years, as well.

27. California – Amelia Lily
Yes, that’s right, Amelia Lily did in fact bring out a song this year. Not many people knew, heard or probably even cared but ‘California’ is a jaunty little number and an evolution from Amelia’s days at Xenomania. It was worth a shot.

26. Changing – Sigma feat. Paloma Faith
We never thought we’d see Paloma Faith as an actual Proper Popstar but this year it did, in fact, happen and it was glorious.

25. Me and My Broken Heart – Rixton
Despite nicking the chorus from Rob Thomas’ exceptional ‘Lonely No More’, Rixton’s debut (and, let’s be honest, probably the only song of theirs that’s getting to number one) shone.

24. Losing – Becky Hill
Becky Hill, formerly of The Voice UK (but probably best if you don’t mention it to her if you see her), released this sparkling, MNEK-produced gem this year. And although it was, let’s be honest, a bit of a flop, this is the kind of pop triumph that deserved to be heard by a much wider audience.

23. Ugly Heart – GRL
The tragedy that befell GRL this year does somewhat overshadow the massive chops of this tune, it’s a sonically brilliant number from Dr Luke and Max Martin, but a saddening reminder of how much GRL had left to give.

22. Your Love – Nicole Scherzinger
When Scherzy popped this number online earlier this year, it was so brilliant that we actually thought she’d have the Album of the Year on her hands, since it was produced in its entirety by Tricky Steward and The-Dream, who produced this. However, she actually served up one of the year’s worst albums – almost baffling in its badness. But at least it had one good track. This is that track.

21. Everything We Touch – Say Lou Lou
Swedish-Australian sisters and pop duo Say Lou Lou were long-listed for the BBC’s Sound of 2014, but never made the short list, for reasons unknown. They are amazing and this song demonstrates the kind of exceptional dream-pop they delve into. Their album, due for release early 2015, should be good.