Home » News » Things To Do » 5 Seconds of Summer: From YouTube To Sold Out Tours 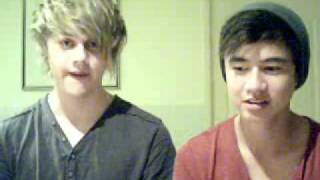 If you’re an avid reader of articles on Wicid, then you may (or may not) have seen a few articles from yours truly regarding an Australian band, 5 Seconds of Summer.

The four Aussies hail from Sydney and have toured with the biggest band of the 21st Century, One Direction. It’s incredible how much publicity and fans the talented teenagers received within the past year, but would you believe that their roots and origins begin at a familiar video sharing website that we’ve grown to love?

We begin the story of 5SOS back in 2011 where Luke Hemmings (then 15) joined together with Calum Hood and Michael Clifford to post covers of popular songs on YouTube. Later that month, 3rd December 2011, drummer Ashton Irwin then joined the band and thus 5 Seconds of Summer (5SOS) was born.

5SOS caught the eye from major music labels and publishers, and signed a publishing deal with Sony ATV Music Publishing. Despite the fact the band had no promotion apart from on Facebook and Twitter, their first music release, an EP titled Unplugged, reached number 3 on the iTunes chart in Australia, and Top 20 in both New Zealand and Sweden.

In May 2012, 5 Seconds of Summer announced tour dates at Factory Theatre in Sydney, Old Museum in Brisbane and Xavier College in Melbourne. All shows sold out within two minutes of going on sale and second shows were then announced in each city, also selling out within minutes. After the success of their release of their Unplugged EP in June 2012, the band embarked on their Twenty Twelve tour, playing dates at Uni Bar in Adelaide, Oxford Art Factory in Sydney, Old Museum in Brisbane, and Corner Hotel in Melbourne.

The four boys spent the second half of 2012 writing and developing their sound alongside Christian Lo Russo and Joel Chapman of Australian band Amy Meredith, the people that wrote two of the songs that feature on the Somewhere New EP – Beside You and Unpredictable which were also co-produced by Joel Chapman.

During October 2012, the band toured Australia where they supported Hot Chelle Rae and Cher Lloyd, playing at the Enmore Theatre in Sydney, the Convention Centre in Brisbane, Festival Hall in Melbourne, Royal Theatre in Canberra, and AEC Theatre in Adelaide.

On 3th November 2012 – the band’s first birthday – 5SOS played their first International show at Zeal Cafe, in Auckland, New Zealand and later that month, on 25th November, they played a headlining show at the Metro Theatre in Sydney.

5SOS gained the attention of someone else that year, which was none other than One Direction’s Louis Tomlinson who posted the link to their YouTube video of their song Gotta Get Out, stating that he’d been a fan of 5 Seconds of Summer “for a while”. Soon after, the band then found a fan in a second member of the famous boyband with One Direction’s Niall Horan tweeting the link to their first song Gotta Get Out. That same day, 19th November, 5SOS released their song Out of my Limit on YouTube, gaining over 100,000 views within the first 24 hours.

December 2012 also saw the boys embarking on their songwriting trip to London in which they wrote songs with artists such as McFly, Roy Stride of Scouting for Girls, Nick Hodgson of Kaiser Chiefs, Jamie Scott, Jake Gosling, Steve Robson and James Bourne of Busted.

On 17 May 2013, 5 Seconds of Summer announced a national Australian tour, Pants Down Tour, with shows in Sydney, Perth, Brisbane, Adelaide and Melbourne, again selling out in minutes.

It was announced on Valentine’s Day 2013 that 5 Seconds of Summer would be supporting One Direction on the UK, American and Australian legs of their Take Me Home World Arena Tour.

2014 is going to be a big year for the band with their first ever UK tour selling out late last year and, after being signed to Capitol Records the end of last year, the boys are now working on their own label, Hi or Hey Records. The band is working very hard on their first album and announced their first single, She Looks So Perfect, on 2nd February 2014.

There is honestly so much more I could tell you about this band and their success, but for you to truly understand, you’d have to just head back to their YouTube channel (originally named Hemmo1996, now called 5 Seconds of Summer) and relive the story yourself.

5 Seconds of Summer are my favourite band and after seeing them at the first Cardiff show of the Take Me Home tour, I fell in love and I hope to see them again someday and maybe even interview them.

It just goes to show how many doors of opportunities YouTube can open for you.

Related Article: 5 Seconds Of Summer Heating Up In The UK