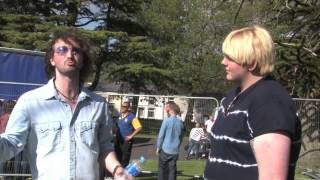 It was a sunny Bank Holiday Saturday and myself and a few other Wicid editorial members had access to the Aberdare Festival in Aberdare Park.

The event was organised by Rhondda Cynon Taf Council.

We arrived at the festival at 10am sharp with all our equipment ready for what was going to be a hectic day of hard work and effort.

There was a lot of things to do on the day from a fun fair to kangaroo gymnastics to live music from local bands and musicians.

The crowd started building up and then the day started off at 11am with a welcome from the one and only Real Radio’s breakfast show hosts, Jagger and Woody.
Shortly after Jagger and Woody left the stage, the event was opened up by local girl Jessie Jenkins from Porth, who got to the Boot Camp stages in The X Factor a few years ago. She performed a few original songs and cover songs before finishing her 25 minute set.

The next act on was two young girls from Treorchy Comprehensive School called Twelve Strings, who amazingly represented the Rhondda by performing at the London Olympic Village last year alongside other big stars. They got the crowd on their feet by performing a few cover songs.

Following Twelve Strings, was local Aberdare boy, who last year supported Olly Murs at Ponty’s Big Weekend and has started writing his own songs and his own album, the one and only X Factor contestant from 2011, Mr John Adams. John opened up with an original song, then played a number of covers, then he finished his set with another original song.

On after John Adams, was another local band, Fireroad, who recently supported another well-known Aberdare band, the Sterophonics, on their last tour. Fireroad performed a number of songs including originals they performed alongside Stereophonics.

The next act on was Wicid‘s previous editor’s band and local Aberdare band, Replaced by Robots. This weekend is the bands 1 year anniversary, and they shot their first ever music video in the park. They played some songs from their latest album ‘Transmissions’ and on their last song they got off the stage and did a bit of crowd dancing and interaction which was such a laugh.

After Replaced by Robots, there was a newly formed band called The Reason who took to the stage and they played covers by Jessie J, Ed Sheeran and a number of well known artists.

It was now time for the last support act before the headlining act. The next band was a six piece tenor rock band who travelled all the way from London, called the Tenors of Rock. They performed a number of songs and medleys by Whitesnake, Thin Lizzy and Kiss.

It was now time for the main act of the day, who is now well known in Aberdare and the rest of South Wales and the UK, it was the one and only, BBC’s The Voice Contestant 2013 and Aberdare singer – Ragsy. He entered the stage with a massive cheer from the big crowd and then performed a number of originals and covers accompanied by his friend who was playing guitar. Once his performance was over we grabbed an interview with the Voice star which can be found on our YouTube channel and to the right of this article.

As soon as Ragsy finished signing autographs and having photos with fans, a helicopter was waiting in Dare Valley Country Park ready to fly him to London for his battle round on The Voice and fortunately he got through to the next round, well done Ragsy.

At 5pm it was time to call it a day with all people leaving the park after a warm day, and everyone getting sun burnt.

A special thanks goes to RCT Events and Orchard Entertainment for putting on a fantastic day and to all stalls, performers, fairground ride owners, security and all the musicians for making this event the success it was.