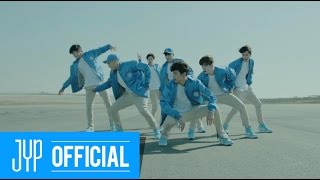 For those of you unfamiliar with GOT7, they are my ultimate bias,a KPOP slang term for favourite group. GOT7 is a South Korean boy group formedby JYP Entertainment in 2014. The group is comprised of seven members,originating from South Korea, Thailand, Hong Kong and the USA. This review willcover their fifth mini album, Flight Log:Departure, released on March 21, 2016, with title tracks ‘Fly’ and ‘Home Run.’

My first impression of the album came from their headline single, ‘Fly.’ I wasn’t fully convinced at first, but it’s one of those tracks thatreally grows on you. It grew on me enough to persuade me to buy the album.

The physical copy of the album comes in two versions; RoseQuartz (a pink cover) and Serenity (a blue cover). The album is packaged in aslip case and when I received a copy it was wrapped up securely and completelyundamaged. The album took two weeks to ship from Korea. I bought it from kpoptown.comand they have never failed me – I highly recommend purchasing Kpop albums fromthem.

I chose the Serenity version of the album and it included someextras, which is always a nice touch. The contents (for both versions) contain:

This was the first GOT7 album that I’vebought and it certainly won’t be the last. I couldn’t be happier and it’s agreat album to start my collection. I also plan on buying Turbulence, which was released on September 27th (watchthis space for the review.)

My favourite song from the album is ‘Home Run’ and my least favouriteis ‘FISH’, just because I haven’t really listened to it and has fallen victimto being the track that’s always unfairly skipped. However, I don’t hate or dislikeany songs.

Overall, I rate this album as 4.5/5. Thealbum concept is very neat and the theories behind the whole album and itsMV’s/Trailers make the messages conveyed open to interpretation. I also reallyenjoyed the aesthetic of the album. The CD could have had a slightly moredecorative design, but it was still good never the less.