Home » News » Local Info » Are The Pitchforks The New Band In Town? 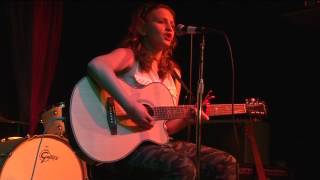 Recently, I came across a new band in town called The Pitchforks.

I first met The Pitchforks at a charity event on the 13th April in memory of a local girl and in aid of LATCH – Wales Children’s’ Cancer Charity at Tonyrefail Non-Pol, where they were performing a few songs at the event.

This is what the band members have to say about themselves:

‘Hi, my name is William Pothecary. I’m the bassist and singer for The Pitchforks. For me it all started a few years ago when my grand-dad pestered me to have piano lessons. My father found a piano teacher. For about a year it was going well until I realised that I found playing the piano boring and I wanted to play the guitar. For my birthday my parents bought me a guitar, Lucy, my piano teacher, was happy to teach me guitar as well and told me to go down to the Non-Pol in Tonyrefail to join a course that her friend Rob Payne was doing. It was March and I went down there with my brother who got a drum kit the previous Christmas. Rob put us in a band with a girl called Lauren, she played guitar. While we were playing I had a go at singing and loved it. The next week my brother Alex brought his friend Ethan down, who wanted to play guitar. With a lot of practising we performed our first gig and all was well. Until we realised we needed a bassist. So far Ollie was playing bass for us, but we needed a permanent member. I brought my friend Lewis down to play but prior to our next gig he let us down with stage fright. I stepped in and loved it; I bought a bass and now play bass.’

‘I am Lauren Humphrey and I’m a rhythm guitarist from The Pitchforks. We got together at The Rock Factory in the Non-Pol which is my favourite place to play with the band. I got my first guitar in 2012 and I didn’t know where to start. We are being asked to play in places like Non-Pol and The Red Cow. We have also played in my house for my brother’s birthday party. I have lessons with Rob Payne who teaches The Rock Factory every Sunday for an hour. My inspirations are Matt Tuck from the band Bullet for my Valentine, Gerard Way from the band My Chemical Romance and James Heffield from Metallica and I hope to inspire others in playing the guitar. Me, Alex and William came to The Rock Factory at the same time and had no clue who each other were. We got put into a band, with myself on guitar, Alex on drums and William singing and playing guitar. A week later Ethan joined and became lead guitar and now William plays bass. Myself and Alex never changed. We started off as Fiery Pitchforks but now we are called…The Pitchforks.’

‘Hi my name is Alex Pothecary; I have been in The Pitchforks for over a year now. My role in the band is the drummer. I’ve always wanted to be a drummer since I was 6 years old. I begged my mother for a drum kit for years and years and finally Christmas time last year, I got my dream – a drum kit.
My father set them up on Boxing Day, but I couldn’t play a thing on the drums, so my father said to come down the Non-Pol on a Sunday. So, me and my brother (the bassist) went down there and met Rob Payne. Rob asked us to go in a band with this girl called Lauren. We had a jam, Rob taught us a couple of things and two weeks later my friend Ethan shows up and that’s how we got together. My inspiration is Dave Grohl the drummer of Nirvana.’

‘My name is Ethan and I am the lead guitarist of The Pitchforks and backing vocals with Alex (the drummer). I started playing the guitar in 2012 when my friend Alex (drummer) told me about The Rock Factory.
Soon after the band got together with Lauren, we had a concert and it went very well and now it has become so good we get paid for gigs. My inspiration for playing the guitar is Slash from Guns & Roses and Kirk Hammett from Metallica.’

Recently, the band has played two charity gigs at their local club, the Tonyrefail Non-Pol in memory of a local girl and also in aid of Wales Children’s Cancer Charity – LATCH. I attended the both charity events and I thought the first time I saw them perform I thought they were really good for their age and have a lot of confidence and ability to make it big in the future.

The band plays a number of different genres of music, such as rock, pop and indie rock. They perform covers by Nirvana, Green Day and also the White Stripes.

The band’s next gig is in The Red Cow pub in Tonyrefail on Saturday 6th July, so come along and witness a new young cover band in RCT.

Below you can find links to one of their performances at a LATCH charity gig and also some other local performances: