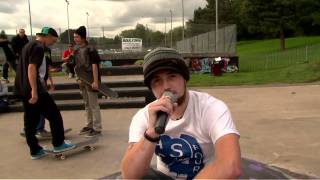 Aberdare Skate park was completed at the end of August 2006 and every September since I have organised a birthday jam to celebrate the parks existence.  The jams are a chance for the locals to show the skills the park has given them over the last year (the progression has been immense, as demonstrated by the continual high standard of ability on show most evenings and weekends) and also to open the door and welcome new participants to skateboarding and bmxing.  Over the last 4 years, ASP Birthday bashes have become a mainstay on the UK events calender and have attracted some of the South Wests biggest names and best riders / skaters.

This year we took the sensible step of getting RCT Detached Youth Services involved. This proved to be the best decision ever, with the ASP4 Skate comp being one of the less stress times I’ve experienced while doing these comps. I also partnered up with Jamie at Black Market Skate & Bike Shop this year, meaning all the prizes and local publicity were taken care of while I went about my day job, something I’ve been unable to do the last 3 years. So first up, Massive thanks to Les, Allyson, Alistair, Charlotte and Louise at RCT Detached Youth Services and the same to Mr Jamie McCardle at Black Market. And of course, thanks to the Ynys staff for their continual co-operation.

Seeing as ASP 4 was in the hands of the uber-team mentioned above, this year we decided to try and do both jams over one weekend. Previous years have seen them take place over 2 weekends, but we thought, hey, what the hell, lets see how it goes with Skate on Saturday and Bike on Sunday. Well, we live in Wales, and it’s September…so you could probably have predicted that the weather was going to play funny buggers.

Saturday 18th was the Skate Jam, and it was awesome. Bright skies, sunshine, a little bit of rain, but we pulled it off. To ensure all ages got a look in, we split the day into 4 separate events;

The first was the 16 and under competition, which gives the younger members of the skate community a chance to shine in front of their friends’ parents. The ability of these mini rippers continues to amaze me! 9 entrants in total, split into groups of 3 for a 3 minute run around the whole park. Extra points were awarded for using the bowl as well as the street area. Some great skating went down. In 3rd place was 9 year old micro-machine and Black Market rider Jamie Richards, 2nd place went to Freestyle boyo Arbel Samsanov and 1st place was secured by Zak King. It takes a lot of nerve to skate in these things, especially when you’re so young, so well done to all the entrants and congratulations to the top 5 whole all went away with some skate goodies.

Next up was the highest ollie competition. Starting at 18inches, the bar was raised 2inches at a time and entrants were allowed 2 attempts at each height. This really sorts the men from the boys, and it was Kill City / DC shoes rider Sam Pulley who took the glory with a massive 31inch 180 ollie. Knucks (bang knuckles) to Sam Pulley, who was also a judge for the age group comps! Thanks dude.

Following the highest ollie came the 17 and over group. Same rules and format as the 16 and under and again, some amazing skating was witnessed. 3rd place went to our very own Rhys “Nipper” Thomas, Newport transplant “Bean-head” came in 2nd and the winner was Kill City ripper Mr Jake Collins. It’s always a pleasure to watch Jake skate, and he has supported every ASP comp so far, a well deserved winner.

And finally, the highlight of the day, the best run / trick in the bowl jam. A fully stacked bowl platform bore witness to quite simply THE best bowl session I have ever witnessed at Aberdare Skate park. With a heavy Kill City / Newport presence it was always a guarantee that some sick skating would go down, but this year our very own Nipper and Merthyr mainstay Chimpo Mcdoodle more than held it down for the valley’s too. Nipper with his blunt variations on the 8ft high tombstone, and Chimpo with his handplants, varials and even a Christ Air!! Check the footage on wicid.tv for visual proof. Truly amazing. The eventual winner was again Jake Collins.

And that was that, the 4th Annual Aberdare Skate park Skateboard Jam. Huge thanks to all the sponsors, to RCT Detached Youth, Boltons Buses, Bronx Rockers and to the judges for the day – Ian “Tomsk” Thomas, Jono Atkinson and Sam Pulley. Also special mention to Edd Dunn and Tim Proctor for their help with scores and that…

Unfortunately the BMX jam scheduled for the next day had to be binned due to the weather, but it’s all systems go for this to now be held on Sunday 26th September.

SEE YOU THERE!
Anthony Dennis