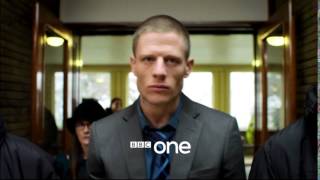 It was one of the best TV drama’s of 2014, now the Yorkshire based crime series is back for a second time. Happy Valley fans were treated to a teaser trailer on Saturday 16th January 2016 on #BBC One.

It is not yet confirmed when exactly the drama will return however there are suggestions of it returning to our screens sometime in February or possibly the start of March.

In series one of the award-winning drama, Sarah Lancashire (ex Coronation Street star) was the stern faced Yorkshire Police sergeant, Catherine Cawood investigated a difficult case where villain Tommy Lee Royce (James Norton); who sexually assaulted Catherine’s daughter which led to her suicide, was back in town. Catherine was haunted by the past as she saw Tommy smoking a cigarette outside a shop whilst she drove past him. Sergeant Cawood was determined to find him and make sure that he would not harm anyone else, what she didn’t know was that Tommy was involved in a kidnap that went horribly wrong.
Cawood was onto him, Tommy had killed one of Catherine’s officers in his path, in a shocking end to episode 4 we saw Sergeant Cawood at the house of Tommy’s mum, in the cellar was the daughter of a local business man, Catherine smelt a rat and forced her way into the cellar. Tommy was on his way home and when he returned he brutally assaulted Police Sergeant Catherine Cawood. It was very tense and many people complained about that episode.
However, the series brought in 8 million viewers to BBC One.

What do we know about series 2?

Well there is a new serial killer on the loose in the valley, as Tommy Lee Royce is behind bars. As we have seen from the trailer he is due to go on trial.

In the second series Sarah Lancashire is set to return as police officer Catherine Cawood and she will be joined by fellow Corrie former stars Julie Hesmondhalgh, who played Hayley in the show, and Katherine Kelly who starred as Becky.

Not much has been given away, by Sally Wainwright has said: “It’s going to be quite different from the first series, but we have kept elements of the first series. It’s a whole new ball game!”

So are you excited?