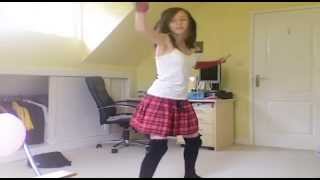 I don’t know if you watched the BBC3 documentary “Beckii Cruel: Superstar at 14” or not, but I did. Since watching that, I looked at Beckii’s videos and to be honest, they seem pretty cool!

She lives in the Isle of Man and is studying for her GCSE’s but during the holidays, she jets of to Japan to perform and just be Beckii Cruel.

Beckii was found on Youtube nearly two years ago now by a Japanese talent scout who saw her popular dance cover of Japanese song, Danjo. He immediately signed her up and Beckii Cruel became famous. Since being signed, Beckii has been doing a lot more dances, shows, etc. Also, she has appeared in a Japanese bubble gum advert, Fit’s.

She has become quite famous over here in the UK, too. She’s since recorded a song “You Can’t Kiss Me” and is releasing “Tokyo Love” and “Just Wanna Have Some Fun” in the new year.

I’ve spoken to Beckii on her live internet chats on Ustream and she seems a very, bubbly, lively, down-to-earth girl. You can also leave questions for her on her Formspring.