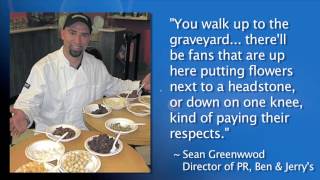 I’ve heard about and seen some pretty weird things in my time, but I think this could possibly be the weirdest. I’m a big lover of Ben & Jerry’s Ice Cream and personally I think it should be prescribed by your doctor, but apparently that can’t happen. Anyway, I was recently scrolling on Twitter when I saw a Tweet saying: “Did you know Ben & Jerry’s have a graveyard for their old flavors?” I literally did a double take before looking it up and guess what? The owner of said Tweet was telling the truth.

‘High on a Vermont hill there’s a Graveyard that’s haunted, by the ghosts of old flavors that nobody wanted,’ or so it’s said on the lawn overlooking the Ben and Jerry’s ice cream factory.

With the popular ice cream company working for over 35 years it’s obvious that some flavours were going to expire. Therefore, a graveyard has been created for fellow ice cream lovers to visit and remember the ice cream flavours that are gone but not forgotten.

Behind a lavender gate and white picket fence, guests are able to come face-to-face with the individual memorials whose tombstones have witty poems as a memorial of the flavours of the past. One of the poems for the flavor ‘Fresh Georgia Peach’ (1986-1991) reads: ‘Fresh-picked peaches, trucked from Georgia, tasted great but couldn’t last, ‘cuz Georgia’s quite-a-ways away, & trucks don’t go that fast.’

I’m not lying when I say this is totally bonkers but at the same time I’m really eager to go there and see the crazy graveyard for myself.

What do you make of all this? Blooming bonkers or a clever gimmick to attract more ice-cream lovers?