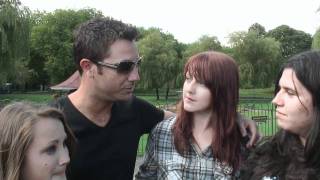 From Friday 5th until Sunday 7th August, Ynysangharad Memorial War Park in Pontypridd was filled with crowds of people who came to see the annual Big Welsh Bite. It was a very successful weekend despite the weather getting rather miserable towards the end. There were a variety of stalls such as craft stalls, well-being stalls and of course, the food stalls. There were lots of different companies there selling some of their food products and from what I had tasted, they were all extremely delicious. Wicid were also there for the weekend telling the young people of RCT about our amazing website. Lots of people were really interested and were eager to sign up. Services for Young People were also there with us doing arts and craft, face painting and nail painting and football goals for people of all ages to take part in for free. There was also a donation bucket for the charity, Macmillan.
There were different events happening on each day such as the sheep show that took place on the Friday and the horse parade that took place on the Sunday. Of course, the most popular event was celebrity chef and former king of the I’m A Celebrity: Get me out of here Jungle, Gino D’acampo, demonstrating some of his very impressive cooking skills. The crowd were madly in love with him as much as he was with them. He did three demonstrations followed by a book signing for his latest book, Gino’s Pasta. We later had the chance to interview Gino and he was a very friendly person who seemed down to earth, too. (Psst there’s a video of the interview attached to this article watch it!)
We also went around some of the food stalls and interviewed the people who run the companies. They were all very friendly people who were nice enough to give us a sample of some of their products. My personal favourite had to be the chocolate stall because me + melted chocolate= heaven! We bumped into Councilor Sylvia Jones, Mayor of Rhondda Cynon Taff who worked in the Fair Trade tent and was kind enough to let us interview her.

Some of us from the Editorial Team volunteered to help with the activities back on our stall such as face painting and nail art which was very fun to take part in and it really put a smile on my face to see that I had made kids happy, though I don’t think I’ll be taking face painting up for a job anytime soon. “Bethanthebarmy”, “Toriabeth!” and I also had a go at some karaoke singing. (Bohemian Rhapsody by Queen) I actually think we drove some people away with our singing so don’t count on us being on next year’s X Factor series!
The whole weekend was full of fun and laughter.  I thoroughly enjoyed every moment of it (except being soaked on the Sunday but my nice cup of tea and cosy Wicid hoodie kept me warm so doo da doo, it’s all good!) I’d like to thank Wicid for letting me come along and the RCT Events for putting on such a fantastic event. I hope to go again next year!