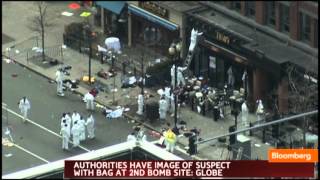 Unless you have been hiding somewhere with no internet or any contact to the outside world, you’ll more than likely be aware of the horrific incident which took place only a week ago in Boston, America, where two bombs exploded at the end of the Boston Marathon.

The incident killed three and injured more than 180.

A week later and the suspects behind the incident have both been found, only one being alive.

The surviving suspect is so seriously injured that investigators may find it hard to interrogate him effectively; it was suggested on Sunday when further questions were raised about the FBI’s previous contacts with his dead brother.

19-year-old Dzhokhar Tsarnaev – who is accused of being the culprit behind the incident that took place on Monday 15th April with his older brother, Tamerlan – was being treated in hospital for a reported bullet wound to the throat and was unable to speak. He was captured on Friday night, a day after a violent gun battle with police that left his brother, Tamerlan Tsarnaev, 26, dead.

Republican member of the Senate Intelligence Committee, Dan Coats, told ABC: “The information that we have is that there was a shot to the throat. It doesn’t mean he can’t communicate, but right now I think he’s in a condition where we can’t get any information from him at all.”

Tom Menino, mayor of Boston, spoke to This Week on ABC, saying that he was so seriously ill that agents might never be able to interrogate him. But there were reports later on Sunday that he was answering questions in writing.

Ed Davis, Boston police commissioner, said the brothers had probably planned more attacks, based on the many more unexploded homemade bombs found at the scene of their gun battle on Friday with police. The stockpile was “as dangerous as it gets in urban policing,” Davis said.

Davis told CBS: “We have reason to believe, based upon the evidence that was found at that scene – the explosions, the explosive ordnance that was unexploded and the firepower that they had – that they were going to attack other individuals.”

The majority of investigators’ attention has focused on a trip to Russia last year by Tamerlan Tsarnaev, and whether he became involved with or was influenced by Chechen separatists or Islamist extremists there.

The brothers immigrated to the United States a decade ago from Dagestan, a predominantly Muslim region in Russia’s Caucasus. U.S. Attorney, Carmen Ortiz, the federal prosecutor for the Boston area, was preparing criminal charges against the younger Tsarnaev, a naturalized U.S. citizen, according to Davis. It was not clear when charges would be filed, but it could be as early as Monday.