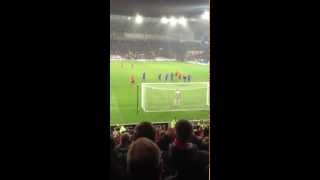 Cardiff got defeated by Nottingham Forest on the weekend 3 – 1. Cardiff are currently 2nd in the Npower Championship table.

Over 20,000 fans turned up to watch Cardiff take on Watford.

The referee for the game was Mark Heywood.

At 7.45pm the game kicked off with Cardiff in possession and Craig Bellamy makes a brilliant cross which is cleared by Watford’s Fitz Hall.

The game is now in the 27th minute and Watford’s Tommie Hoban dribbles the ball through Cardiff’s defence and makes a brilliant shot from the six yard box which made it Cardiff 0 – 1 Watford.

Half time was growing more and more closer and the Cardiff fans were on their feet giving their support to their team.

The 4th official indicated 2 minutes of added time on to the first half.

At the start of the second half Cardiff make a subsitute with Craig Bellamy coming off for Joe Mason.

At the 71st minute Cardiff is given a penalty after a handball by Watford’s Mark Yeates.

Peter Whittingham steps up to the penalty spot ready to take the penalty and he shoots and it’s a brilliant shot which equalises the scores, making it Cardiff 1 – 1 Watford.

As full time is growing closer Cardiff make another substitute with Tommy Smith coming off for Aron Gunnarsson.

With an extra 5 minutes added on Cardiff’s Aron Gunnarsson makes a fantastic shot which makes it Cardiff 2 – 1 Watford.

The final whistle is blown by the referee.

It was game over for Watford as Cardiff won 2 – 1.

The Cardiff fans were on their feet celebrating the fantastic and well earned win!!