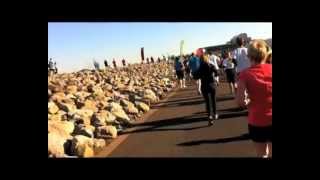 On Sunday 14th October 2012, more than 50,000 people headed to Cardiff for the tenth Half Marathon. Athletics legend and former Olympic hurdler Colin Jackson started the event, at 9am outside Cardiff Castle.

The mens race was won by Andrew Lesuuda, of Kenya, in a record Cardiff Half Marathon time of 1 hour, 2 minutes and 21 seconds, ahead of John Kales and last year’s winner Edwin Kiptoo.

The womens race was won by Susan Partridge, of Swansea, in a time of 1 hour, 11 minutes and 10 seconds, ahead of Eunice Kales and Edinah Kwambai.

However, the race wasn’t just full of professional runners. There were thousands of other people running the marathon in order to raise money for good causes and charities.

Twenty year old Ellis Healy was one of these runners; he was raising money for Marie Curie Cancer in memory of his Uncle Jimmy who sadly passed away last Christmas.

Dressed as a daffodil, he said: “Me, my brother and sister decided to run the race – we raised £1,500 between us which is great.”

A big well done to all runners that took part and for those who raised money for charity!

Don’t forget to sign up for next year’s Cardiff Half Marathon!