Home » News » People in Your Life » Charleston, Anyone? Still In Love With You – Electro Velvet 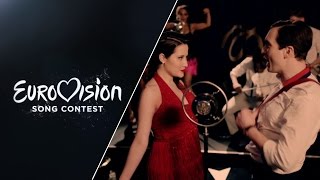 In November, the BBC had an open selection online where artists sent their entries into the BBC. And a few weeks ago the BBC revealed who was representing the UK: Electro Velvet. Guy Freeman said: “After many entries one song stood out from the rest.”

You may have heard of Bianca Nicholas before as she hasn’t long auditioned on The Voice UK 2014 which amazed over 250,000 people on YouTube and over a few million while they watched on TV.

You may ask who Alex Larke is. He is from a tribute act of the Rolling Stones and his band is the Rolling Clones and performs in the UK and internationally.

After we saw the song it was a love and hate thing like Marmite, and as I’m a part of a Facebook group for a fan club of the UK At Eurovision we all had mixed opinions but some of the haters soon turned into lovers after a few listens.

The key thing here, is how they are going to perform the whole song as they are only allowed 6 on a stage and lucky it isn’t such a big stage and the performance also helps alongside if they can sing live. (Will be talked further in another article.)

After we found it was a music video not a live audience we wanted to all see if Alex Larke could sing live as many people did not know who he was!

Also, the lyrics in the song are weird if you listen to them for example:

“Don’t get on an old train
Don’t fly an old plane
Don’t go out in the pouring rain
You might get wet, I’d be upset
You might catch sneezes or some nasty diseases
Take good care when I’m not there
‘Cause I’m still in love with you.”

These sound like an advert for health put into a 1920s song but what also makes it 1920s is when Alex does his Scatman in the middle of the song.

Overall I think it is catchy, it’s different from all the other countries this year as its mainly a ballad year and its catchy with the introduction of the whole song and I laughed when I first saw it. But, I think it might be a chance for the UK to win the Eurovision Song Contest. For the 60th year.

Five articles left for Eurovision before the full show is in swing: