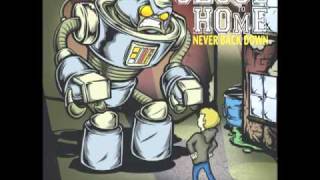 Close To Home are an American post-hardcore band from Ohio, formed in 2005. Since then, they have released two EPs, 3 of which are mixed and 1 demo, alongside three full length albums.

Their albums include their major label debut, ‘Picture Perfect, Never Back Down’ (released in February 2011) and ‘Momentum’ (released in July 2012).

Close To Home can be considered as a really heavy band, but they have a unique edge consisting of a mixture of pop punk and metalcore.

‘Momentum’ and ‘Never Back Down’ are two of my favourite albums at the moment. Like most people’s favourite bands, they’ve helped me through a lot which has resulted in me understanding their music to a greater extent.

‘Momentum’ is rather heavy, with some pretty lyrics and melodies. The mixture of metalcore and punk rock in this album definitely shines through as you make your way down the soundtrack. I love the intro to the album, as it’s basically soft singing and a keyboard. It’s so relaxing, then you get to the next song and it totally contrasts what you were just listening to. The vocals in the song ‘Don’t Waste Your Breath’ seem like a lot of other bands I listen to but there’s just an attitude they capture which I’m really into at the moment.

‘Never Back Down’ has been my favourite listen for the past few months. I’ve been through some tough times but I found myself listening more and more as time went by. It has the same atmosphere and mood as ‘Momentum’, but it provides the listener with a sort of experience, which lets them bring themselves back up. This album is definitely a lot lighter than their latest, ‘Momentum’. It has more of a punky ring to it but it works really well with the harsh vocals and the lighter vocals.

They are a 5 piece band with Josh Wells on guitar and backing vocals, Andrew DeNeef on lead vocals, JJ Cooper on guitar, Travis Hartman on drums and Josh Trenkamp on bass. They’ve had a few members previous to these, which made the band stop touring for a couple of years. Despite this, they carried on and kept fighting for what they love.

I would absolutely recommend this band to anyone who likes heavier music, or to those who like punk music. It’s a tad different to punk, but it’s worth the listen.