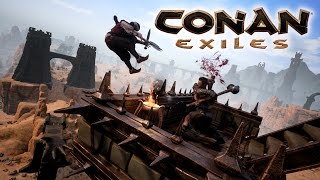 Set in the beautifully scenic but deadly world of Conan the Barbarian, Conan exiles is a survival sandbox game – a genre currently thriving within the gaming world. The game is currently in early access, regularly being improved upon and expanded by its original developers ‘Funcom’.

The game was released for PC users on the 31st of January this year and has been generally well received, selling 320,00 copies in its first week of release but not without some mixed reviews on game distribution sites such as Steam. It was initially said to be released this Spring on consoles, but the PS4 release date is still yet to be decided.

Upon entering the game, players are first greeted with a cut scene setting the somewhat darker tone the developers wish to create, emulating the brutal story of Conan the Barbarian. All wrong doers or criminals are sent to the exiled lands to be crucified and left in the sweltering heat of a prehistoric desert to die. However, these lands are not uninhabited with many of those killers, thieves and sometimes cannibal savages cutting the unfortunates down from their cross to give false hope of a new life to those being ‘saved’. You as a player, must travel through the vast exiled lands trying to survive and thrive amongst  ferocious beasts, as well as your fellow man.

The game has a relatively wide range of mechanics considering how early in development it is. Character customisation is currently a part of the starting sequence with limited customisation on your character’s fictional race, sex, physique, face, religion etc. The religion system of the game is currently comprised of 4 main Gods to start with; Crom, Set, Yog and Mitra. Each god has their own perks and ways of worship. Players who do not wish to interact with the religion function of the game may choose to follow Crom who does not require worship, therefore players will not gain or lose anything from doing so. There are more gods in the world however a player must first find a non-playable character to teach them the ways of said gods.

Like many survival-sandbox games, players will need to start from scratch collecting natural materials from around the world to create clothes and tools before gaining more advanced items. Whilst doing this players must maintain their hunger and thirst, as well as their vitality otherwise they are soon to meet an untimely end, thus making it all the more difficult for them in the future. On the other hand, if new exiles do make a solid foundation for themselves in the cruel lands, they will find themselves levelling up rapidly, allowing them to unlock more advanced weapons, armour, building materials and altars for them to worship their God and gain more powerful benefits. The game contains a simple but effective building system that allows players to make their own bases with a fair level of exterior and interior customisation.

Players must hunt for food to stay alive, poaching the wide variety of sometimes dinosaur-like creatures in the world and/or destroying any humans they may wish to feast upon (yum). Which of course, many of the games NPCs (non-player characters) don’t take very kindly to and will fight back, engaging players in the game’s combat system. As of now, the combat mechanic in the game is fairly basic and standard to the genre, but Funcom are striving to improve their combat system above their competitors. If not properly equipped, players will soon find themselves in trouble either running away or being too slow to do so (I found that out the hard way.)

New exiles may find starting out in this game challenging so it is recommended to learn a few things about the mechanics before starting. It is possible for players to play with others to make starting out a bit easier using the clan system the game offers. The clan system supports single player, local co-op, online co-op or online multiplayer. The multiplayer servers consist of 5 categories to choose from: Purist, Relaxed, Hardcore, Roleplaying and Experimental, offering users a wide range of experiences to enjoy. Unfortunately, I couldn’t experience the co-op side of things as none of my friends have the game. Gamers can also ‘persuade’ NPCs in the world to work for them and carry out jobs using their ‘wheel of pain’. This allows users to create their own small or large communities of thralls.

Conan Exiles looks to be a very promising upcoming title for the future with committed developers at Funcom working to expand its features and fix bugs that the game inevitably will have at this early stage. Over the next few months we should see a lot of changes and features added to its gameplay, some of which include:

If surviving and thriving in a huge prehistoric world filled with vengeful Gods, evil humans and terrifying beasts interests you, look forward to this potential-filled title and start playing. Survive, build and dominate! Showcases and trailers above.