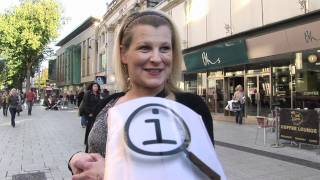 Have you watched a program called QI?

If you have, well done you.

If you haven’t, go onto YouTube and watch some. It is rather brilliant. Who knew a panel show would be both funny and informative? And the theme tune is rather funky too. Not only that, Stephen Fry presents it. What more do you need?

But this is not an article to urge you to watch the show. This is to congratulate our dearly beloved Cardiff.

Why? I hear you cry, with a hint of confusion. Well, Cardiff are in the QI League Table Of General Ignorance, and good news, the folk in Cardiff aren’t as ignorant as the rest of the UK.

In a survey carried out by Webpoll on behalf of QI, using questions for the new General Ignorance book, it has been revealed that Swindon is the most ignorant town, while York is the least ignorant. You may be happy when I tell you that Cardiff, the only Welsh town in the study, ended as the seventh least ignorant town of Britain, only two places behind London and three places behind Edinburgh.

Some of the questions include “Which country invented football?”; “How many legs does an octopus have?” and the question everyone orders about “Which came first, the chicken or the egg?”.

According to The Thought Fox, answers ranged from the incredibly well-informed and hugely entertaining, to the mind-bendingly random and gloriously ignorant. The video that I’ve embedded (well, not me personally, but go along with me here) shows some of the answers given by the joyous people of Britain.

Here is the final QI League Table Of General Ignorance, from cleverest town down. A more in-depth table can be found here.