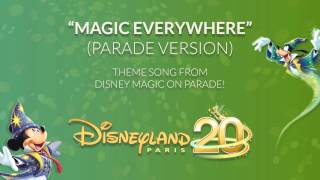 Disney Magic on Parade was the name of this year’s parade which saw all of your Disney favourites including Pixar stars such as Toy Story, new princesses Tiana and Rapunzel, your old-time classics such as Winnie the Pooh and, of course, the originals such as Disney’s number one star, Mickey Mouse, as they all came together in amazing dance numbers in celebration of the park’s birthday. The parades are always amazing and emotional but this year, with an updated version of the floats and characters that performed, the parade was – without a doubt – my favourite out of all the Disney parades I’ve seen.

A new feature that has been added to the park is the chance to meet Mickey Mouse in his own dressing room. In my opinion, this made people’s visit feel more personal and it clearly appealed to the children that they were going backstage and into the famous icon’s dressing room and spending some time with him. Despite the fact that the queue was rather long, the fact that old Disney shorts were being played on a screen in an old fashioned cinema-style room made the wait time less stressful and more entertaining for all of the family. I personally thought that was a great addition, too, because the shorts aren’t made anymore and the younger audience could see where Mickey first started out. The wait is completely worth it as you get quite a bit of time with Mickey as he entertains each family and you get plenty of time to take memorable photos that you will always be able to treasure.

The Disney Celebration Train has been at the park since the 15th Anniversary back in 2007 and has proven to be such a hit that it has been there ever since. The colourful character express has had a makeover and a new song “Do You Believe” but still had the lovable characters on board who entertained guests on a regular basis and left everyone with a massive smile on their face and gave memories that will last a lifetime for all of the family.

Finally, the most spectacular castle show is what blew everyone away at night time. Disney Dreams! is a magical, immersive night time spectacular which was shown especially for the park’s 20th birthday which projected the biggest dreams of Disney’s movies and characters played out in a thrilling, huge sound and light spectacle taking over the whole of Central Plaza, Sleeping Beauty Castle and Main Street. This was the park’s answer to World of Color at Disney California Adventure park and Fantasmic! at Tokyo DisneySea and it did not fail to please whatsoever. The show incorporated water screens, fountains, lasers, pyrotechnics, fantastic projections, fire and many more other special effects. This truly brought the magic of Disney to life and was an unforgettable experience.

The overall anniversary was amazing, as usual, and I thoroughly enjoyed my time at the celebration. The imagineers and cast members did yet another fantastic job and I really cannot wait to see what will be in store at the resort over the next few years. Happy 20th birthday, Disneyland Paris!