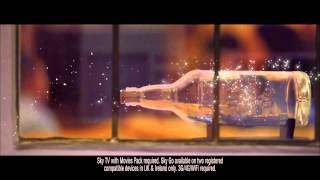 Good news for Disney lovers who have the movies package on Sky.

Sky Movies | Disney, a brand new channel dedicated to the one of the greatest names in family entertainment, has been announced.

Sky Movies | Disney, will be available and exclusive to Sky customers from Easter and will be the home of animated classics, live action adventures, Pixar hits and the newest Disney titles and will be making a mark in history due to the fact that it will be the first time that Disney teams up with another movie channel anywhere in the world. It is also the first time that viewers in the UK and Ireland will be able to watch all Disney-branded blockbusters and classics from the past on one single channel.

Sky Movies | Disney will also be available on demand and on the move via Sky Go and NOW TV, meaning you can enjoy the fun and excitement whenever and wherever you like.

The fantastic new channel will be launching on Thursday 28th March with the TV premiere of Disney Pixar’s Brave, the action-packed, BAFTA-winning hit that’s set amongst the colourful clans of Scotland. But fear not, classic lovers, as Merida and the other new characters aren’t the only ones who will be available to watch on this channel.

Classics such as Bambi, The Lion King and Cinderella are just some of the old time favourites that will be regularly appearing on the channel, as well as Pixar favourites such as A Bugs Life and Cars and not to mention the much-loved Pirates of the Caribbean.

“Sky Movies | Disney will be the home of new and classic Disney and Disney/Pixar movies and will offer all new titles at least a year before other TV channels or subscription services. The combination of Disney’s fantastic movies and Sky’s award-winning innovation means that customers will have the chance to enjoy the very best of Disney on their own terms, whether that’s watching on demand, on the move or in 3D.”

Are you excited to see Disney getting its own Sky Movies channel? What films are you looking forward to be able to watch? Comment below!

1 thought on “Disney Nerd: Sky Movies | Disney to be released”