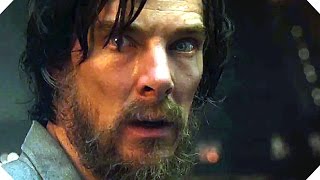 Disney is on top form this year with four titles currently sitting at the top of the box office charts. Does Doctor Strange live up to that form? Of course, it’s Marvel.

This is Marvel’s 14th film in the Marvel Cinematic Universe and the second film of phase 3. The bar was set rather high with Marvel’s preceding release, Captain America: Civil War, which hit the big screen earlier this year and was a huge success.

Doctor Strange wasn’t a well-known Marvel character prior to the release of the movie, but I’m sure that the sales of Doctor Strange comic books will soar through the roof next week. Benedict Cumberbatch gave an amazing portrayal of the arrogant, selfish and genius Doctor and the masterful, mystical and magical Wizard.

I jumped out of my seat in the car crash scene because it was so sudden. I really liked Strange’s first trip when he was flying through the different realms because it was the perfect balance of great acting and CGI. The setting of Kamar-Taj, an isolated sanctuary in the Himalayas for mystics and sorcerers, was intriguing and the elements of the mise-en-scene portrayed a mysterious and magical place that is reflective of Doctor Strange’s character.

The New York sanctum and hospital fight was really well done. The way Strange kept changing the biomes was brilliantly captured. I also loved the fight when they were going through the hospital like ghosts and nobody even knew they were fighting. This scene really demonstrated the superb cinematography of the film.

The best fight scene of the film was the final bust up between Strange and Dormammu, the chief antagonist and villain. Strange came up with a great way to defeat a god – it was the best use of an infinity stone in the Marvel Universe we’ve seen to date. Dormammu looked amazing, as did everything else in the film. It showed the change between Doctor Strange at the start of the film compared to the end when he was prepared to rewind those 8 seconds on a loop for the rest of his life. Talking about the infinity stones, the only one left to find before Avengers Infinity War is the sole gem.

Benedict Cumberbatch was perfect for the role of Doctor Strange and I can’t wait to see more of him interacting with other Avengers. He is a very good hand actor – great American accent, too.

Tilda Swinton played the role of The Ancient One superbly. She sold every scene she was in, particularly the scene with Doctor Strange at the end when she died, which was very sad and touching. “Here I am, slowing down the seconds just to see a little bit more falling slow,” and then she vanished.

Chiwetel Ejiofor was great and was very mysterious at the end when he went a bit mad. Mads Mikkelsen was a good villain and had a good motive. Rachel McAdams was alright and was pretty realistic. Wong was a bit odd, but he had a few funny scenes and provided some comic relief.

“A true marvel fan stays until the credits have finished rolling” – I listened and I don’t think they were as strong as the Captain America post credit scenes, but they were still good. The Thor one was funny and I think this confirms that Doctor Strange will appear in Thor: Ragnorok. The second one confirms that Chiwetel Ejiofor has taken a dark turn and will return as a villain in future Doctor Strange movies.

To conclude, I think that this film was a great introduction for Doctor Strange to the Marvel Cinematic Universe. The first half was a bit slow, but necessary for character development and proved to be worthwhile as the second half was fast-paced, exiting and brilliant. This film was the most beautiful Marvel movie yet, with excellent fight scenes and mesmerising visuals and I can’t wait for future Doctor Strange titles.