Home » News » Things To Do » Doctor Who: Return To Earth (For Nintendo Wii) 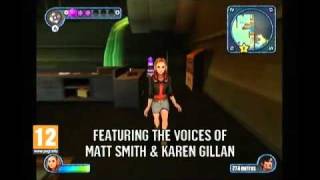 As a massive Doctor Who fan (I know I’m not cool, there’s no need to tell me), playing and reviewing this game was a total must. Being such a Who-head can be a blessing or a curse when playing a video game based on my favourite Time Traveller, because you can be sure I’m either going to love every second or criticize every pixel; there really isn’t any room for any middle ground.

Luckily for the people at Asylum Entertainment, it was a lot closer to stud than dud.

My initial concern when I turned on my Nintendo Wii today was that the story writer wouldn’t stay true to the Doctor that we all know and love; there was absolutely no way I’d be able to enjoy a game with gaping plot-holes that contradict the series. Thankfully, I was met by an entirely new storyline, a wise move on the BBC’s part. Oli Smith (writer for Doctor Who video games and novels) must have experience here, and I’m sure he’s aware that meddling with a previous story would result in his head on the chopper. Instead he played it safe and it paid off, the result being a believable and exciting plot which could have just as easily been an episode of the latest series. Of course, creating new villains would be just as risky, so Smith referred to the classic enemies of the Doctor, and what Doctor Who story would be complete without a Dalek, or a handful of Cybermen?

The game does set off at a mundanely slow pace, and it isn’t until Chapter 6 that we get to see that those dreaded Cybermen are involved. However, if you’re anything like me, meaning your co-ordination skills are … mediocre at best, you’ll need these few levels to get the hang of the controls. It’s not a particularly difficult game for anyone used to the Wii, as my twelve year old sister demonstrated with ease. The way the game works is simple yet effective; easy to get to terms with, yet not too repetitive. Although the game begins like a Flash Player game on a fan site, by Chapter 3 the pace increases and the introduction of familiar music from the series makes the whole thing more intense and, well just generally more fun, to the point where it even gets quite addictive. Although some things would just not happen in the show, the game is pretty loyal to what we already know of the Doctor.

In fact, the only time it strays away from the straight and narrow is to allow for classic video game components; different coloured ‘keys’ for different doors, moving panels, the usual. The game is at a reasonable level of difficulty admittedly a lot harder than I first imagined, being a children’s game, yet still fairly doable. It has the perfect mix between having to use initiative and being given instruction; too far either way would make the game far less enjoyable.

If I was to pick up on something this game lacked, it would be quality graphics. Yes, the Doctor and Amy Pond are recognisable, but it is more to do with the clothing than it is to do with efficient CGI. However, the Nintendo is the games console nerd, in comparison to PlayStation the jock and Xbox the pretty boy, so we can forgive this; Nintendo has brought us the most well known characters, and bad graphics has never stopped them, so this shouldn’t be any different. Another slight let down (although this is just me being picky) is the bonus material. Basically, for collecting “money” during the game, you can unlock a picture. It would be a good idea if it were a computer game, so the pictures could be saved, but on a games console, these are pretty much pointless. An unlock-able video or mini-game would perhaps be a step up, but if that wasn’t an option, it would’ve been wiser just to leave out the embarrassing attempt of an extra feature.

Ultimately, this game is the perfect gift for the ultimate Doctor Who fan; it certainly brought a smile to my face to hear Matt Smith and Karen Gillan speak after I make a spectacularly good shot with the sonic screwdriver (never used as a weapon of course, as any fan would tell you; it doesn’t kill, doesn’t harm, doesn’t maim, but it is very good at opening doors), and I feel all the more in tune with my Timetraveller side after playing it. Even with its faults, it is generally a good gift for any fan of the Man in the Big Blue Box.

1 thought on “Doctor Who: Return To Earth (For Nintendo Wii)”