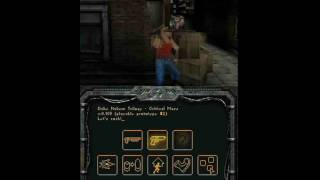 I’ve recently played Duke Nukem Critical Mass on Nintendo DS, and let me tell you now that its terrible, the box is flashy and says “buy me, I’m an awesome game” but never judge a game by its cover.
After a few minutes i could tell this wasn’t going to be a good game, it’s is very repetitive and was more like playing a game of Nazi Zombies on Call of Duty. (Which is the most repetitive game I’ve ever played EVER)
I would compare the graphics to an old retro style of Mario vs Donkey Kong from the old fashioned arcades, it made me want to sleep more than playing on it all night which I think is terrible for a DS game.  (Sad Face)
On the plus side, this game isn’t really violent and I didn’t think it’s necessary for it to be a twelve.

All in all I think it’s good idea but let’s be honest it just doesn’t work and can’t see how people are going to buy this game.  It’s no where near as good as any of the other Duke Nukem or other first person shooter games on the DS.  If you fancy a funny 5 minutes of random shoot em ups buy this game, if you’re looking for something to really get into get something else.