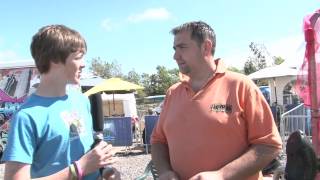 We all set off in the car on our way to the Eisteddfod. We had the Sat Nav but it was no use whatsoever so Craig (Editor) was listening to Nathan’s directions. Our adrenaline was pumping as we get closer. We got there in the end and because it was quite early there wasn’t many people around but as the day progressed, there were more and more people coming.

As we got through the gates, we all went on the hunt for the toilets. As we were on the hunt I saw my mates who were competing so we asked them where the toilets were but they were backstage! As we made our way backstage, there was a man making sure nobody who wasn’t allowed backstage got through. He didn’t speak any English so Craig or Nathan didn’t understand what the man was saying but I can speak Welsh so I just told him that we were doing interviews and he allowed us through with no further questions. Craig gave me a pat on the back with a big smile on his face.

We were looking at the stalls to find the Clic tent – we had a number to tell us where it was but there were no numbers on the stalls. So, we were on a hunt again but we found the stall pretty quickly and thank goodness it wasn’t far, so we settled down for a bit and said our hello’s and then went off with the camera and the mic. Craig said he would like an introduction for the filming to say where we are and who we are with so we set off to find a good location. We found a really good location but the smell was terrible – the smell was like horse manure, actually it was much worse than horse manure – and it took us a couple of takes because of the smell putting us off. By the side of us were stone steps and Craig asked us to jump off them and he will film it in slow motion; the results were very good and it made everyone laugh.

After we did the introduction we set off to find interviewees and on the way there was a red dragon walking up to us but it turns out that it was Craig’s friend and he said that he had been looking for Craig all day – just to say that it was him in the dragon costume! We all burst out laughing.

During the day we went to all different parts of the Eisteddfod and in one part there was a massive aeroplane but it had no wings; it was just a tin with windows really, and inside of it was glass that we walked on and you could see all the insides of the plane. After we all looked in the plane, we went out and interviewed the person in charge. I (Olivia) filmed and Nathan interviewed the gentleman.

In the same area as the plane there was a TV presenter from S4C and he was singing to the children about numbers and counting with your fingers. Me being me, I joined in, and Craig filmed it. We moved on to the Techniquest tent were they’d brought some of their stuff from Cardiff so we played with some of the stuff and Craig filmed some of the things that we played with. At one end of the room there was a mini F1 car and Nathan loves F1 so he tried to get in it but Nathan is really tall so he was having trouble getting out!

In a different part of the tent there were computers that were indestructible, so we interviewed the gentleman who was in charge of them. It was really interesting. After that we dumped our camera and mic back at the Clic tent and went for food with Dan from Clic. The day before I’d told Nathan to bring food because it’s very expensive in the Eisteddfod, but being a man he didn’t listen to me, so he had to buy food which cost him £3.00 just for a plate of chips! Craig had fish and chips, Dan had a pork roll and he was told that a pig’s head was on show at the front of the stall. Dan said he wanted an interview with the pig but I just looked at him stupid, I couldn’t imagine interviewing a pig’s head.

After we ate our food we went back to do more interviews so we grabbed our stuff and set off again. This time around we didn’t interview a lot because we went in the big pink tent were the stage was and there wasn’t a lot going when we went there but there was a lady on the stage talking; we waited until she finished because we didn’t want to be rude. After she finished, we had a wander and Dan wanted an ice cream and as he was walking up to us we filmed him eating his ice cream as he was pulling funny faces and making us laugh. After some more looking around we turned back and on the way we saw fair-trade and we interviewed the lady there. She spoke Welsh so I interviewed her and after that Craig and Nathan boughyt a can of fair-trade coke and they really enjoyed it so we filmed about how nice and cheap the can was.

After that we said our goodbyes to the Clic gang and we set off back home. The time was about 5:30 pm and we had been there since 11:00am. We got on the motorway and I (Olivia) fell asleep on the way but I’ve got to be honest it was a long day .

*Note from Editor – Video due soon*