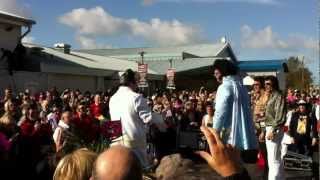 On the 28th – 30th September, over 30,000 people attended the annual Elvis Festival in Porthcawl, South Wales.

There were thousands of Elvis fans ready for a weekend of music by ‘The King’. Even our very own Wicid Nan attended! Did you spot her?

This year’s festival proved to be the most successful so far, according to the festival organiser. Fortunately, the weather held up and it was nice and sunny – unlike the past 2 years where it had rained.

The festival was first staged nine years ago and it’s steadily grown in popularity in and around Wales.This year, the organisers even claimed a world record had been broken – with 814 fans dressed as the king of rock’n’roll. This has yet to be verified but the previous record is held by 645 Nike employees at a sales convention in Las Vegas in November 2010. Check out the video above to see the attempt at the World Record.

The festival brings Elvis fans to Porthcawl from afar as Germany, Malta and even Brazil – with different Elvises aged between 3 to 80. This year’s festival was held at the Grand Pavilion and the Trecco Bay Holiday Park.

The best Elvis Impersonator Prize went to Darren Jones, 40, from Cwmbran, Newport. He was up against 10 other contenders from the South Wales area.

The crown for the best Elvis of the 2012 Festival was awarded to Ben Thompson, 47, from London, England.

“This year’s festival has been a great success and let’s hope it goes well next year.”