Home » News » Things To Do » Eurovision Song Contest: Come Together… 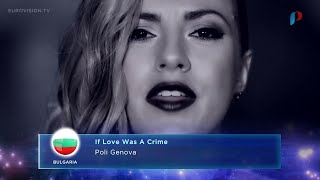 Now, it’s the month of Eurovision. It’s May! And Eurovision is only around the corner – to be exact it starts on the 10th of May! In this article you will see my top 42 countries and, yes, Australia is back for a second year being represented by Dami Im. While the UK are represented by Joe & Jake with You’re Not Alone and Not Bianca with Shine a Little Light but anyway enough about the entries, time for the stage.

The stage is different from many years, see the images for more. It hasn’t got a catwalk from last year in Austria, the logos however are similar. But, Sweden’s logo is a bunch of digital dandelions from the Junior Eurovision Song Contest (yes, there’s a Junior Eurovision Song Contest and we participated in it in the early days – 2000-2003ish on ITV) which had a similar logo, but 2015 and 2016 are both circular logos which was a let-down for me, as I was hoping they could be creative as they were in 2013 when the contest was in Malmo. The hosts – I’m happy for Petra Meade (the host of Eurovision’s Greatest Hits and who hosted Eurovision in 2013), the second host is last year’s winner, Mans Zelmerlow, and during the final we will see Lyndra Woodruff.

Now, onto the Top 42 with comments.

40th Montenegro – Highway – The Real Thing: is it the real thing? I don’t know. I didn’t really like it so it sits here.

39th Moldova – Lidia Isac – Falling Stars: the performance I saw in the recap video; her vocals were slightly weak and I don’t think this song will go through to the final.

38th Bosnia and Herzegovina – Dalal & Deen feat. Ana Rucner and Jala – Ljubav Je: the song, it may be the only one with no English at all in the contest but it doesn’t really work for Eurovision. It hasn’t got that It Factor.

37th Belarus – IVAN – Help To Fly: He’s made controversy with wanting live wolves and to be naked on stage but the song has nothing to do with that, thank god..

35th Greece – Argo – Utopian Land: Greece is also like Slovenia used to be – in my top favourites. This year it’s far from it.

33rd Belgium – Laura Tesoro – What’s the Pressure?: I like the song. it’s catchy. quite different from last year. Good luck to Belgium.

31st Hungary – Freddie – Pioneer: I like the song but does it deserve to be in the top 20?

30th Lithuania – Donny Montell – I’ve Been Waiting For This Night: I’m not fond of this song at all… but good luck to Lithuania.

29th Sweden – Frans – If I Were Sorry: Dislike it. It’s a bland song, disappointed in Sweden compared to the other acts in Melodifestivalen.

28th Slovenia – ManuElla – Blue & Red: Slovenia was my top favourite for two years in a row but this time the song wasn’t really the best.

27th Albania – Eneda Tarifa – Fairytale: the song was originally supposed to be sung in Albanian, now its English and I’d rather the Albanian version.

26th United Kingdom – Joe & Jake – You’re Not Alone: last place for me. If this was the Grand final, last place. Nul points (BIANCA SHOULD HAVE WON).

25th Ireland – Nicky Burne – Sunlight: Nicky Nicky Nicky, Stick to the votes? I don?t really like the song, it’s not really his style.

24th France – Amir – J’ai Cherche: I don’t know about this year with France. It’s got that feeling to it but I don’t know. And it also has a bit of English in the song.

23rd Israel – Hovi Star – Made Of Stars: kind of bland, not my taste, but could do well.

22nd Norway – Agnete – Icebreaker: I’d rather have Monster Like Me because that was an amazing song.

21st Spain – Barei – Say Yay!: I’m glad this song is already in the final – something to be happy for! And it’s a non-Spanish song from Spain, so who knows!

20th Italy – Francesca Michielin – No Degree of Separation: the song title is English and it does contain English but the majority of the song is Italian. I like this entry although I hated last years.

19th F.Y.R Macedonia – Kapoli – Dona: It’s not the first she’s represented Macedonia. This song is okay, it’s not that bad I guess.

18th Czech Republic – Gabriela Guncikova – I Stand: I honestly hope this song goes through to the final as it’s an amazing song!

17th Croatia – Nina Kraljic – Lighthouse: I love this song, hopefully it will qualify for the final.

16th Russia – Sergey Lazarev – You Are The Only One: Russia, the anti-LGBT country, couldn’t send a more camp song that rings out Eurovision. I love the song.

14th Serbia – Sanja Vu’i – ZAA – Goodbye (Shelter): now it’s not Like last year where we had a mid way change of tempo but I like it.

13th Latvia – Justs – Heartbeat: This song is amazing, worthy of being in the final as it was written by my favourite from last year, Animata, who sang Love Injected for Latvia!

12th Denmark – Lighthouse X – Soldiers of Love: this year Denmark are one of my top 12 and normally my top 12 is full of female artists. Lighthouse X are a boy band, I feel this song will do very well in Eurovision.

11th Switzerland – Rykka – Last of Our Kind: Second year in a row, Switzerland has sent a good entry that I adore. Hope this qualifies for the final.

10th Ukraine – Jamala – 1944: the song is amazing and very cultured. I adore Ukraine, they send amazing entries every year. Ukraine, thank you.

9th Armenia – Iveta Mukuchyan – LoveWave: I love this song, it hit me like a Love Wave.

7th Azerbaijan – Samra – Miracle: this song is amazing! Love it, but Ghost pipped this to being 6th for me.

6th Germany – Ghost – Jamie-Lee: I hope this song doesn’t get nul points like Ann Sophie did. It’s a cute song and deserves points.

5th Bulgaria – Poli Genova – If Love Was a Crime: I absolutely love this song, adore it.

4th Malta – Ira Losco – Walk On Water: Love it, it’s a catchy song and deserves to be in the final.

3rd Australia – Dami Im – Sound of Silence: Dami Im, she’s one to watch out for. She may win – who knows – it’s Eurovision.

2nd Austria – Zoe – Lion D’ici : It’s nice to see a full French song from a non-French speaking country to sing a French song with so many English songs. Love it.