Home » News » Things To Do » Eurovision’s Greatest Hits – The Review 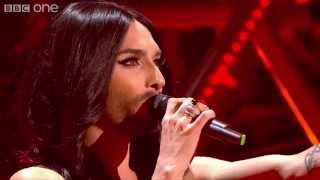 On Good Friday the BBC televised a show celebrating 60 Years of Eurovision which was called ‘Eurovision’s Greatest Hits’. This was entirely different from The 50th Celebration that wasn’t televised in the UK, but we did have a show celebrating Eurovision, which was called ‘Boom Bang a Bang: 50 Years of Eurovision’; which was hosted by ex- commentator, Terry Wogan and this time the 60th Anniversary Show was hosted by Graham Norton (the current UK commentator) and Petra Mede (the host of the 2013 Eurovision Song Contest).

Eurovision’s Greatest Hits – What Is It?

Eurovision’s greatest hits is a show specially put together by the BBC which was broadcasted on various days in Europe. As for the UK and Ireland it was Good Friday, and for others like Sweden it was Saturday.

Altogether there were 15 acts, even if you weren’t born then I somehow know and remember them and the 15 acts were:

1976 – United Kingdom: Brotherhood of Man
‘Save Your Kisses for Me’

There was also an interval act that was from the 1994 contest which was River Dance. And at the end of the show all the acts came together in a melody of songs; the first was ‘Hallelujah’, sung by Anne Marie, The Herreys came and sang ‘Nel Blu Dipinto di Blu’ and then Bobbysocks sang ‘Making Your Mind Up’ and managed to rip two of the dancers trousers and then Dana Internation and Conchita held hands and started singing Abba’s ‘Waterloo’, and soon after the remaining ones came onto the stage and sang.

Throughout the episode, Petra and Graham made jokes like at the start, where they introduced themselves: “Graham, you’re normally right at the back. How does it feel to be finally on the stage?” and Petra made a joke about how many times Eurovision was held in London: “London has played the host of Eurovision 4 times and if you can remember where they were hosted then you a true Eurovision Fan!” and Graham just looked at Petra weirdly.

I loved every bit of the episode, it was fantastic and it was great to see artists from past and present unite on stage to celebrate 60 wonderful years of Eurovision!