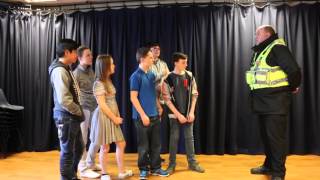 Young people are often seen as creating problems within local communities, but through consultation with the young people at Ferndale Youth Provision we found that community safety was an issue to them, as well.

The young people in our provision wanted to work with the community and partners to address what they saw as young peoples community safety issues.

One issue in particular was identified – grass fires. Many members of the group had been affected by grass fires during the previous year. The issue was highlighted in the our Viewpoint consultation; an annual survey facilitated via Rhondda Cynon Taf’s Youth Engagement and Participation Service, where 5% of the 486 young people answered: “didn’t feel safe in their community due to grass fires”.

Statistics provided by the police and Crime Commissioner’s Office showed that from January – March 2015 over a third (39%) of deliberate grass fires recorded took place in Rhondda Cynon Taf. Our Youth Provision is based in the Ferndale Cluster, and has become a targeted “hotspot”.

The young people identified a number of projects they would like to do on the subject of community safety – one of the ideas the young people had was to access funding to complete a video blog around the subject of grass fires and the effects it has on the whole of the community. Their idea was to develop a video which looked at the different perspectives of those involved in, and affected by, the crime. These would include the fire starters, fire officers, police, community members and wildlife officers. The Youth Participation Officer was fortunate to be able to access funding from YEPS, Communities First, and the Police and Crime Commissioner, to start the process in January. The filming took place in April, which is considered “prime season” for grass fires.

Initially the project involved young people aged between 11 – 19 years of age who created a story board and filmed the video. Once the video was completed the young people involved, premiered the DVD to 120 young people at a community safety event to highlight the issues surrounding grass fires to other schools, youth groups and community groups across Rhondda Cynon Taf.

You can view the videos we made here:

The DVD has been shared with schools throughout the whole of RhonddaCynon Taf and presented in school assemblies.

What difference has the project made to thelives of the young people?

Young people havedeveloped a number of skills from participating in these activities, including:

*         Theyhave learnt that there’s a consequences of their actions

What difference has the project made to thecommunity?

*         There has been a decrease in anti social behaviour, especially on the evenings that Youthprovision is open

*         Raisedawareness of the social impact of grass fires and arson

*         Decreasein the number of grass fires during the last Easter term compared to 2014statistics.

How does the project demonstrate value formoney?

Working inpartnership has enabled us to target resources effectively between differentservices. The Youth Service has access to young people who the Fire Service and police want to target.

There is now arelationship between the different services and local young people, respect andtrust has been developed there, the young people are less likely to getinvolved in actions that impact on community safety. Consequently, this has had a positive impacton the budget of other service providers.

On behalf of the young people at Ferndale’s Youth Provision, we’d like to thank all of those who funded the project and the community partners who supported us.

Home > Articles > The Fires In The Valleys