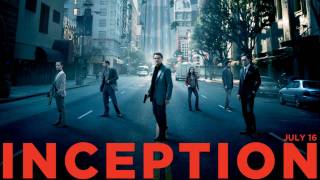 Since I came out of the cinema, I’ve been dying to write about it. This film had such an affect on me that I’ve been thinking about it since the closing credits. I watched Toy Story 3 after this one, and I found Inception crossing my mind over and over again, deducing what happened and what I thought of it. What did I think of it? It’s one of my favourite films of all time.

The story is, to put it bluntly, insanely complicated. Cobb (Leonardo DiCaprio) is an “extractor”, which means he goes into people’s dreams and steals their secrets. However, he has a scarred past to do with his wife, and because of numerous contracts with many people, he can’t go home, meaning he’s permanently away from his wife and kids. So, he makes a deal with a big business man to do with Inception. Inception, in this film, is where a person manages to plant an idea into some one’s dream leading to this someone implementing that idea. Cobb has to do this Inception on another big business man, so he gathers a team to do the job. Though that sounds kind of simple, it really isn’t. I can’t explain much further as I will give away numerous spoilers, so I won’t. You’ll have to see it to understand it.

I’ll discuss the film as a whole at the end, I’ll do the simple stuff now.

The main cast of the film is full of supremely well-known actors, namely the likes of DiCaprio, Ellen Page, Joseph Gordon-Levitt, Cillian Murphy and, that English guy, the one in Batman….oh yeah, Michael Caine. Everyone delivers stellar performances, DiCaprio plays the struggling extractor trying to forget (or is he?) his past superbly, I wish we could’ve seen more of Ellen Page, not only that she’s lovely, but also that her Ariadne (Ar-ee-add-nay) is brilliant, but the winner of this cast is Gordon-Levitt. He’s superb as the sort of side-kick to DiCaprio, as he gradually appears to be the rock to Cobb and the behind-the-scenes mastermind behind the entire plan.

It would be utterly impossible not to talk about the effects in this film. As dreams “collapse”, i.e. the subject is about to wake up from his dream or he’s realised that he’s being extracted, the many explosions and crumbling buildings are simply a joy to watch. It seems Christopher Nolan, the genius behind this whole film (he wrote, produced and directed it), took a leaf from the Jerry Bruckheimer notebook, but it was far more classy than any Bruckheimer production. Nolan wanted the whole thing to be as real as possible, meaning even the falling debris actually fell from the ceiling (nevertheless it was soft, but still, not as much CGI as you’d expect from a film of this magnitude). The highlight of the entire film regarding CGI, nay, the highlight of the entire film? When it all goes into zero gravity, which is easily explained and makes perfect sense. Gordon-Levitt is forced to float through corridors, move the dreamers and even have a zero gravity fight. It’s insane, I’ve never seen anything like it before.

I have to also make a small paragraph about the score by Hans Zimmer. Just watch the video I’ve linked, particularly between 22 and 40 seconds. It’s amazing. Those sounds between 0.22 and 0.40 reappear throughout the whole film, and it’s such an incredible sound it both scared and excited me at the same time. The Inception Soundtrack may be the first orchestra album I ever buy, it was simply perfect.

Finally, Inception as a whole. In short, it’s genius. Nolan has given us such an original film that you have to applaud the man, considering his previous films – The Dark Knight, Memento, The Prestige – all films that make you think, challenges you into connecting the dots, doesn’t let you calm down for one second as if you don’t concentrate for, quite literally, 5 seconds, you will be forever lost in understanding the complexity of the film. You have to pay attention for all 147 minutes, never take your eyes off it, listen to every spoken word as it is always relevant to the big picture.

Quite simply, Inception is one of the best films I’ve seen in a very, very, very long while. Not much this summer will be able to match my excitement for it, it’s possible that when Harry Potter and the Deathly Hallows comes out, I will be more excited, but I don’t think I’ll see an overall better film in the cinema than this one for many years to come.