Home » News » Things To Do » Film Review: A Monster Calls 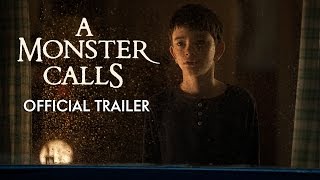 A Monster Calls takes viewers on a beautiful and amazing journey with troubled twelve-year-old Connor (Lewis MacDougall). You instantly sympathise with Connor as we see that he is experiencing a very sad and difficult period in his life. This film has potential to be one of the films of the year with its amazing script and great characters. Patrick Ness, author of the novel, wrote the screenplay and the film was directed by J.A Bayona.

Connor lives with his terminally ill mum and has to do lots of things around the house to help her, which means he doesn’t get the attention and care a boy of his age needs. Connor also gets bullied in school and seems invisible to everybody there. It doesn’t sound like an ideal life. Connor’s character has great character development which makes you sympathise with him and brings a tear to your eye. It makes you question what you would do if you were in Connor’s shoes.

One night, at 12:07, a monster visits and tells him 3 stories, visualised to the audience through beautiful watercolour inspired animation, which teaches him lessons on how to deal with his life. The monster helps him with the bullying and fills him with confidence and rage. This tear-jerking adventure takes the audience on a sadness, joy, anger, and fear filled rollercoaster of emotions.

This truly is a beautiful film with great art and CGI. The monster looked incredible in every shot he was in with his branches and orange sparks of fire. MacDougall’s performance as Connor was brilliant and sincere. Felicity Jones was also very good as Connor’s Mum and Sigourney Weaver played the scary Grandmother brilliantly.

This is a very original and touching story, beautifully told by Patrick Ness. The ending was very emotional and I hope this film will do very well. Part of what makes this story so brilliant is that Connor’s situation is believable and relatable to many people – aside from the giant monster of course.

The timing of the release in cinemas was perfect too because January is not film heavy this year and everybody is looking for a film to see with the cinema vouchers they got for Christmas. I am giving this film 4.5/5 stars.