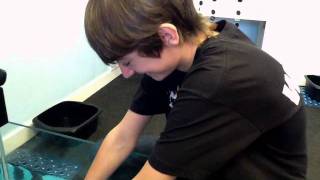 Liam (aka. Peter Piper) and Owen (Photographs)
At 10:30am I woke up from my bed to my mother’s loud shout up the stairs

“LIAM, YOUR FOOT SPA IS TODAY!”

So I woke up and went down stairs to jump straight into the shower and had breakfast.  After I showered and dressed,  I made my way up stairs again still half asleep to find my IPod Notification pop up saying……
“Email off Craig Chapman – Wicid”
When I checked it said that Owen and myself have to meet Craig at Baguette Express in Aberdare at 11:45!  I had to rush around and get into my wicid t-shirt and phone Owen to come up my house so my mother could take us over.  Luckily enough he had phoned me anyway so I told him to come straight up and we’ll go.  So after he came up we went straight over.  On top of Ferndale mountain something must have happened because the road had completely been blocked off, so we had to go through one of the toughest roads in Wales

We went through Ferndale behind a bus and made it through and straight to Maerdy Mountain.
We quickly made it over the mountain and to Baguette express in Aberdare, we spotted Craig getting a mug of coffee and a welsh cake, so we greeted each other and got all our mugs of coffee/tea and our welsh cakes, we then sat down and met Craig’s friend who is a teacher called Richard (or if he teachers at your school – Mr Burns), we were all having a look at Craig’s iPad whilst having our tea and welsh cakes.  Then a nice lady asked if we were ready for the treatment? So finished our coffees and wondered in to “Foot Revive”.  We  had to sign a form, after we had finished signing we had to put our feet in bowls of clean warm water and wash them, the woman then put cold spray all over our feet before we put our feet in the swarm of 120 mini piranhas that were in to eat our feet.
The flyer we had told us about how this spa treatment got into Britain. It has been introduced to the world for years but only spread out over the UK over the last 18 months.  Before it did spread, famous celebrities were having it done in London, but 18 months ago people started opening business’ doing this spa treatment, it then landed at Cardiff street Aberdare six months ago!
The piranha type fish are called Gara Rufa Fish. They originally come from Turkey and there are about 100 garra species of fish some large and some small. The ones we had were obviously small and they were toothless so they sucked on our feet, on the flyer it said there was two types, these are:
Doctor Fish (They suck the dead skin off your feet/hands)
Silver therapists (Produce an Enzyme that has a revitalising effect on the new skin cells)
They felt all slimy and you could defiantly feel them nipping on your toes, heels and soles!
After Owen had his feet done he dried them and went to sit down and have a chat with everyone he had met on this morning treat.
After I had finished I dried my feet and had cream smothered on them I then went to another tank to have my hands sucked on. I think the ones that had my feet were stuffed!!

Later on, Chainey and Craig (not Craig Chapman, Craig Harris, a different Craig) came in with a huge video camera and filmed around the spa. (I think anyone who passed thought that we were a TV programme!)
Then, as there were two free tanks Chainey and Craig Harris went in and put there feet in whilst the other Craig (Editor Craig) filmed us.
Then the woman who was working there told us about the tanks,
The water already in them gets sucked into a filter tank (That you sit on as there is seats on top) and all the bacteria that is from peoples feet get cleaned out of the water and fresh water gets put back into the tank automatically!
Every fifteen minutes the tank of water is fresh and bacteria free!!
If you would like to book an appointment please either phone them on: 07972755795 or you can walk in and book a time at:

Unit 3, National Court, 54 Cardiff Street Aberdare CF44 7DL (Behind Baguette Express)
If you are interested in having a go! It’s fun!

**Note from Editor** There is no website for this business as of yet, here are the prices below.

If you tell them you’ve seen this article on Wicid.tv you’ll get a discount saving you £1 on feet and 50p on hands.