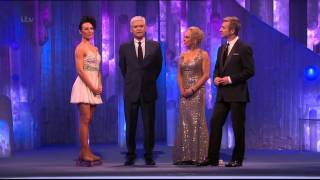 If you watched this Sunday’s Dancing On Ice, you would be aware of the fact that the viewers’ vote had to be cancelled due to Welsh contestant and former rugby player and Welsh captain, Gareth Thomas, was too ill to perform and was forced to withdraw. Thomas had been sick and experiencing dizziness all week whilst performing flying moves on a harness. Last night the Welshman could only perform one out of two of his routines with partner, Robin Johnstone.

Viewers who had phoned to vote, complained and demanded a refund for the phonecall and have been told to check the Dancing on Ice website today (04/03/2013) for details.

Lapinskas said of the poorly Thomas “He is my brother and I love him to pieces.”

Thomas scored 33.5 out of 40 for his first spin round the ice with Johnstone. Although feeling unwell, the Welshman finished his first routine to Coldplay’s “Viva La Vida” and gained praise from a judge, former Pussycat Doll – Ashley Roberts, who applauded his transformation during his time on the show. Despite the encouragement, he departed the stage unable to talk. Gareth then saw a doctor, and supported by his mother, the decision was then made for him to withdraw from the competition.

What do you think of the former rugby player’s withdrawal? Was he your favourite in the competition? Or was it somebody else who won your vote? Let us know in the comments below!