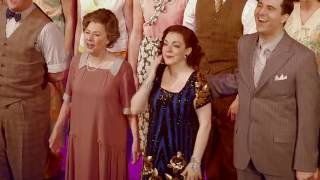 A must-see for any self-respecting musical theatre buff, “Funny Girl” at the Wales Millennium Centre celebrates the film that brought Streisand (and ginger and jazz) to our screens and embedded itself in musical history.

“Funny Girl” is a semi-biopic about legendary Follies’ performer Fanny Brice, her rise to fame and troubled marriage with petty crook and extreme charmer, Nick Arnstein. It is also the film that launched Barbra Streisand into super stardom following her portrayal of Brice in both the 1964 Broadway musical and 1968 film for which she won the Academy Award for Best Actress.

The UK and Ireland tour of: “Funny Girl” stars Sheridan Smith the lead role of Brice (and Natasha Barnes at selected performances), opposite her leading man Darius Campbell as Arnstein, as well as a cast of experienced theatre, television, film and recording artists, headed by Tony-nominated Director, Michael Mayer (“Hedwig and the Angry Inch”, “Thoroughly Modern Millie”).

“Funny Girl” has spawned arguably some of the greatest and most iconic theatre songs of any musical including: “I’m The Greatest Star”, “People”, “I Am Man, You Are Woman”, “My Man” and every performers back-pocket-go-to anthem: “Don’t Rain on My Parade”, but more than that, Fanny Brice is a role model to all those quirky, talented misfits with a dream and the drive to achieve them. If you are a: “Glee” fan then you should be familiar with all of the above as Rachel Berry eventually succeeds in landing her dream role as Fanny Brice (see season 5, episode 9).

Simply put, I could not stop smiling throughout the entire show! As a huge fan of the Streisand film and soundtrack I had high hopes which were exceeded.  The music was completely fantastic, but nostalgic Georgian costumes, and the energetic and vaudevillian choreography was also a treat; especially Joshua Lay as Brice’s long-suffering friend: Eddie, who tapped his way into the audience’s affections. Two of my favourite scenes were Eddie and Mrs Brice (Rachel Izen) in their playful rendition of: “Who Taught Her Everything?”  And the ensemble’s performance of: “Henry Street” which was filled with joy, a sense of community, and loveable neighbours, like Mrs Meeker (Zoe Ann Bown) and Mrs Strakosh (Myra Sands) who reminded my grandmother of: “when me and my friends get together!”

As well as humour, music and camaraderie, “Funny Girl” is a love story. The chemistry of Smith and Campbell was immediate – as soon as he spoke his first line as the smooth-talking, tall, dark and handsome Arnstein – she was hooked! Their duets and solos added layer upon layer to their story and deepened their connection, while Campbell’s sombre and devilish rendition of: “Temporary Arrangement” added the menace his character needed to become more than just an extension of Brice.

Sheridan Smith had a mountainous task to take on Streisand’s most iconic role, but she delivered the ambitious, talented, and schmucky, Brice with such humour, grace and sincerity that she received a standing ovation from the entire audience; and from the Twitter reaction this was not the first. Her commitment to the character and all her mannerism, her good humour, perfect comic timing and impressive vocals truly made her the greatest star.

If you can get a ticket, get ONE! This revival of a true piece of musical history cannot be missed. For more information please visit Funny Girl UK for last few dates of the tour.