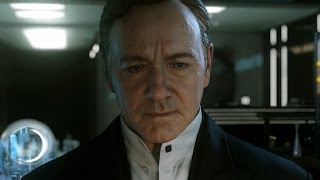 * Editor’s Note: The video embedded with this article may not be suitable for a younger audience. *

Hey, guys. VGBish here with an article on Call Of Duty: Advanced Warfare.

This Call Of Duty looks to be a good one as more and more info is being leaked. My favourite person to watch for this info is the YouTuber, Ali-A. But, as usual, this time of year people are questioning – will it be good? I think it looks great, some people may say it’s just the advertising but I really want this game as it seems to be so good with all the upgrades that have been announced and all the features we have seen in the trailer.

Personally, I think this is set just before Call Of Duty: Ghosts where technology would have been at its peak. If you have played Ghosts you will know that technology becomes obsolete as the Loki Strikes wipe everything out; now, my theory might be far off the actual story but I hope we have some CoD celebrity appearances such as the ghost of Captain Price or maybe the one we haven’t seen for a while – Captain MacMillan who’s the gillie sniper you carry on CoD 4.

Now, with the review, I am really excited with what we see in the trailer but it does look like it’s ripping off Titanfall a little bit with the mech suit and its abilities. Also, I have spotted the tank from the Ghosts map, Sovereign, in the trailer which has unleashed the fan boy within me which has then been followed with an update of my CoD timeline. I think that the timeline currently goes MW3, BO2 Advanced Warfare, then Ghosts as I have said previously but this game does look good and it looks better and better the more information we receive.

So, hopefully, I wangle a freebie off a big company or E3 but – yeah – enjoy the suspense and as always have a nice day!