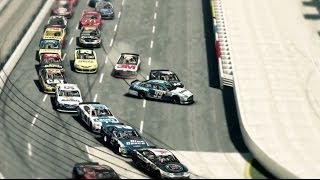 Hey, guys. VGBish here with a review on NASCAR ’14 for the PS3 which, in my opinion, is a specifically-made game for car buffs as you need to know about cars to really get into the game. You need to know about things like tyre pressures and grill tape and things like that, so it’s not really my thing as I prefer games that require little to no thinking. Right, let’s get into the review.

I found the story really linear with not much room for improvement.

The graphics are alright but there were bugs and, honestly, with all these next gen racing games coming out this one seems a bit dated software-wise.

Now, the sounds I didn’t like as I could not define which engine was which when I was driving as there was one continuous engine noise but this may have been caused by budget problems.

There was basically no soundtrack to this game and, honestly, this game would have had a better rating if they had put a soundtrack in.

I do not like this games features as you need to know about tyre pressures and grill tape which, as a gamer rather than a petrolhead, I know nothing about. Also this game has confusing menu options.

Buy Or Not To Buy: Buy-ish

If you are a racing fan I wouldn’t recommend purchasing this game new for 30 pound; I would recommend getting it pre-owned as there is no online pass needed and is solely a single player game.

This has been VGBish, sorry for the harsh review but as always have a nice day.