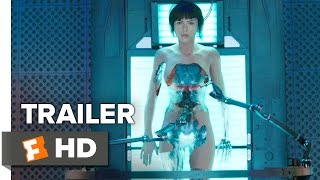 In our fast-paced, modern, technological world we’re not encouraged to slow down and think about what or who we might be building. Ghost in the Shell poses some interesting questions about man’s use, and perhaps abuse, of technology.

Ghost in the Shell (2017) stars Scarlett Johansson as Major, a robot with the brain of a human who has been programmed to defend the world against terrorism and crime, but soon enough she faces the question of whose side is she really on. The stand-out feature of this film is that the cinematography is electric; with densely populated and illuminated urban space, special effects that look do not look too computer generated, and a world inhabited by robots, cyber-enhanced humans, holograms and advanced communication that any old-school sci-fi fan would dream of. Although, we do still drive cars in 2029. The director, Rupert Sanders, puts the estimated $120,000,000 budget to good use by creating a world that is familiar but leaps ahead of where we are, iPhones included.

Side note, this may be totally coincidental, but ‘Logan’ which I recently reviewed, was also based in 2029. Fascinating year, it seems!

Ghost in the Shell is an adaptation of the 1995 picture of the same name which gained acclaim and a significant fanbase – it was even referenced in the Matrix trilogy! I feel that it would appeal to a broad audience, from sci-fi fans, action-lovers, anime-consumers and more. Although the film poses some interesting and complex questions, it doesn’t drift into a pretentious place, making it enjoyable and unpredictable. There are some familiar elements, such as Government interference, which features heavily in films such as V for Vendetta, and the unseen consequences of human enhancement, as seen in Lucy, also starring Johannson.

For this reason, I do feel that although Johansson gives a good and entertaining performance, it feels very similar to her previous characters, such as Black Widow throughout the various Avengers movies. She is a rigid, often cold, deadly machine of a woman who always catches the bad guy and protects the innocents. As her character, Major, navigates this world as a one-of-a-kind super weapon, she battles with fuzzy memories and a lack of understanding of her previous life. One of the important discussions had during this story between the characters (and the audience) is whether our memories define us?

I class myself as a bit of a technophobe, I view technology as a frenemy that deserves admiration but demands caution. As such, I took a number of thoughts away from this film; one of my favourite being: “We embrace technology, but we wonder whether we are losing our individuality”. In a world of keyboard warriors, cyber-attacks and trolling, as well as the gadgets that have infiltrated almost every nook and cranny of our daily lives (I’m looking at you, Apple) this is a powerful and pertinent message.

As a viewer that has no previous knowledge of the story’s animated past, I cannot comment on whether this adaptation was a successful update/addition, but I did enjoy it greatly and would recommend it as a film that is worth a moment’s attention.