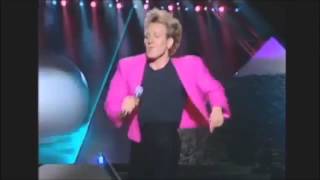 Now, it all started in 1956, in Teatro Kursaal Lugano, Switzerland, with 7 countries performing two songs each, also 3 other countries tried to participate in the first year of Eurovision these were :

These countries all failed to enter by the submission date. For example, the United Kingdom’s choice was picked after the Eurovision Song Contest had finished.

Over the years, there were language barrier bans, and a lot of nil points around then. The UK, of course, didn’t receive nil points until 2003 with Jemini’s ‘Cry Baby’ earning us the disappointing nil points.

There is now an official language in Eurovision; it’s called the ‘La’s’. Here are the many ‘La’s’:

Also, over the years, records have been broken, with Alexander Rybak – ‘Fairytale’ – of Norway being a runaway winner in 2009.

With Eurovision around the corner, before the big event comes the anniversary event. Speculations have been rife around the BBC – who were supposed to host the 50th Anniversary in 2005 – but it was decided Denmark were going to host it as the BBC were going to poke fun at the contest, so then it was later hosted in Forum Copenhagen.

So, this year the BBC will be hosting:
– Eurovision Song Contest’s Greatest Hits in London. The rumoured hosts are Petra Mede, who hosted the Song Contest in 2013 in Malmo, and the United Kingdom Commentator who took over from Terry Wogan, Graham Norton.

The theme this year is ‘Building Bridges’, and for the first time ever, the song contest is hosted by 3 women and the green room is hosted by Conchita Wurst, and waiting in the wings to be announced is our entrant to hopefully win the Eurovision Song Contest. Austria are the official hosts for the 2015 Eurovision.

Did you know Austria is where we first won with Sandie Shaw – ‘Puppet on a String’?

So that’s all from me for now!

See ya another time for another article all about Eurovision soon.