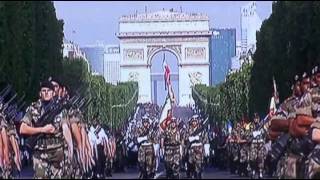 Didn’t understand it? Nah, don’t worry, it wasn’t that important. So, why am I speaking French when this is a Welsh/English bi-lingual site? Well, my petite croissants, I am using my small understanding of the French language as I am going to tell you about Bastille Day.

So, just what is Bastille Day? It’s the name given in English-speaking countries to the French National Day that is celebrated on the 14th July. In France, it’s called La FÃªte Nationale, which translates as: ‘The National Celebration’.

Bastille Day is seen as a day to remember the 1790 FÃªte de la FÃ©dÃ©ration, and it’s held on the first anniversary of the storming of the Bastille on 14th July 1789. The anniversary of the storming of the Bastille fortress-prison was seen as a symbol of the uprising of the modern nation, and of the bringing-together of the whole French nation inside the constitutional monarchy which preceded the First Republic, during the French Revolution.

Lots of festivities and official ceremonies take place all across France. The oldest and largest regular military parade in Europe is held on the morning of 14th July, on the Champs-Ã‰lysÃ©es avenue in Paris and is watched by esteemed attendees, such as the President of the Republic, French officials and foreign guests. The Bastille Day Military Parade opens with cadets from the Ã‰cole Polytechnique, Saint-Cyr, Ã‰cole Navale and they’re followed by troops, while aircraft of the Patrouille de France aerobatics team circle proudly overhead.

It wouldn’t be a French holiday without a deliciously, mouth-watering meal. In some parts of France it’s traditional to have a picnic on Bastille Day, but in most regions, families head home to enjoy a nice leisurely meal in the middle of the day. Of course, many families enjoy this meal at home – in their backyards or gardens in order to enjoy the weather. This special meal can consist of just about anything, but generally speaking, the menu is light. The courses are likely to include cold starters, such as quiches and salads instead of soup or other warm starters. Then, a gloriously delectable dessert will be the crowning glory. A big feast on Bastille Day in the middle of the day is often followed by a very leisurely afternoon. So, bon apetite!

If you happen to be in France on Bastille Day, then keep in mind that nearly all of Paris’ museums stay open on this French holiday. And even better, the Louvre Museum will be free on Saturday, July 14th to celebrate Bastille Day.