Home » News » Things To Do » I Keep Going To The River: The Return of Ella Henderson 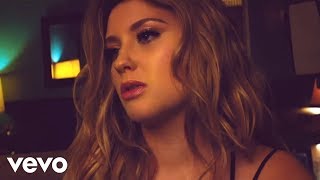 You may or may not know that on Monday night at approximately 9:35pm during the live results for Britain’s Got Talent there was, as there always is, a musical performance.

Except this time, things were a bit different. The musical performer was an 18 year old female who, just two short years ago, had stood on that same stage and left it for the last time with her dreams dashed. The next in a very long line of singing hopefuls leaving empty handed.

Ella Henderson, on her first appearance on The X Factor 2012, was immediately singled out by the public and the judges as something of a rarity. Just 16 years old with a haunting maturity to her already powerful voice, Henderson broke people’s hearts with her original composition, written for her late grandfather. But it was with her harrowingly sincere performance of Cher’s ‘Believe’ – where she injected soul and heartache into a classic yet opaque and vapid pop song – that she was etched into the viewers’ minds. She was surely the favourite to take The X Factor crown, her presence in the latter stages of the show assured.

But, somehow, Henderson found herself voted off the show in the sixth week of live competition after a sing-off with eventual winner and King of Social Media, James Arthur. Henderson left the competition as the token ‘Good Contestant Voted Off Too Early’, a now traditional element of the competition ever since Laura White got kicked off and caused a debate in the House of Commons.

Henderson, who was once touted as the next possible Leona Lewis; a future star in the making, left the public gaze. There were whispers of a deal with Syco, Simon Cowell’s record label (it’s interesting to note the winner of The X Factor also secures a deal with Syco, but these are notoriously short lived) and collaborations with Salaam Rami, who co-wrote Amy Winehouse’s second and final album, Back To Black. There were snippets of acoustic renderings of new songs plonked onto YouTube. And then…well, not a lot.

Until now. After a brief ‘get-on-with-it’ social media promotion of a ‘trail’, Ella Henderson unveiled her debut single, ‘Ghost’, on April 22nd. There are very few songs that instantly register as ridiculously iconic on the first listen, but ‘Ghost’ – with its equally brilliant and gorgeous video – hits the mark with all the finesse and execution of an SAS sniper. Louisiana beats and a gospel backing explode into a chorus that’s best described as heart-racing chords mixed with an uplifting message. It’s the best debut from an X Factor alumni since Leona’s ‘Bleeding Love’, and considering the care and money that has gone into Henderson (the song was co-written by Ryan Tedder, who’s worked with Adele and BeyoncÃ© and heads up One Republic) there’s not a penny that’s gone to waste.

In the True Detective-esque video, there’s the climactic sequence where Henderson, dressed in a flowing red dress with smoky eyes and tousled hair, struts down a street followed by police cars, belting the final chorus of the song directly at the camera. “I keep going to the river to pray,” Henderson soars. “‘Cause I need something that can wash out the pain.” Looking directly at the camera and she smoulders, you get the immediate feeling that Ella Henderson is no ordinary popster. She’s the real deal.
And the same can be said for Henderson’s debut live performance of the song on Britain’s Got Talent last night. Stood behind a wall of glittering lights, Henderson belted out the song and you got the feeling that this truly was a singer in control of the song and everything around her, it’s quite amazing how rare you find yourself in the situation of not seeing a song make the singer chase desperately to hit every note and satisfy you. But standing still, a smile on her face, you could easily see Henderson strutting down the catwalk of a stadium belting out this song to hundreds of thousands of screaming loons.

When Ghost is finally released on June 8th, it will hopefully signal the arrival of a chart force to be reckoned with and a shining new star of pop. Hopefully then, the ghost of Ella Henderson will be haunting us for years to come.

Related Article: The X Factor To Get Axed?