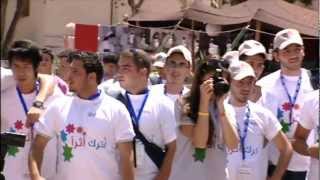 International Youth Day is an awareness day that was first brought to the table by the United Nations in 1999, and the first official International Youth Day followed a year later on the 12th August, 2000. Luckily, no Millennium Bugs managed to infect the day with their horrible little teeth and swarm over it, pinning it down, with their spindly little legs and the day is still going strong to this day. The insecticide the UN used against the Bugs was top-quality, which isn’t the same that can be said for the progression of the GB football team in the Olympics. Oh, well.

International Youth Day first came about when the United Nations General Assembly endorsed (authorised) a recommendation that was made to them by the World Conference of Ministers Responsible for Youth (the conference happened in Lisbon on the 8th-12th August, 1998). From then on in, 12th August was declared International Youth Day. It was written in its resolution 54/120, which can be read here.

The theme of the Day is: ‘Building a Better World: Partnering with Youth’ – basically, a global encouragement to develop and engage in partnerships with and for youth.

Many activities and events that take place around the world on International Youth Day promote the benefits that young people bring into the world. Many countries participate in this global event, which may include youth conferences on issues such as education and employment. Other activities include concerts promoting the world’s youth, as well as various sporting events, parades and mobile exhibitions that showcase young people’s achievements.

We all know the challenges that young people face today, such as high levels of unemployment, lack of key skills, drug/alcohol abuse, a rising number of pregnancy amongst young females, confidence issues, relationship issues, parent/family problems etc. But don’t you think it’s about time to help alleviate these challenges? International Youth Day definitely thinks so and partnerships – with the United Nations, governments, the private sector, civil society, academia, and philanthropists – can help increase opportunities for the success of young people. So, let’s all celebrate International Youth day – a worthwhile cause!

The video is of International Youth day in Jordan, check it out.