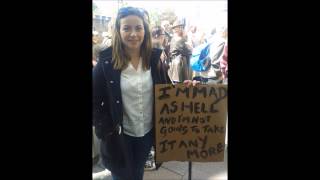 Over 200people gathered around the Nye Bevan statue in Cardiff on Saturday to protestagainst austerity and the expected cuts now the Conservatives are in power.

Nobody expected the Tories to win a majority in theGeneral Election. Perhaps it’s the case that Labour weren’t as passionatelyanti-austerity as they should have been, and any deal with the SNP wasemphatically off the table. Perhaps there are many more ‘shy Tories’ aspreviously thought or it’s down to ‘I’m alright, Jack,’ attitudes.

The choice to meet under the Nye Bevan statue was agood one. I’ve never felt so protective over our NHS, especially with membersof my own family currently in hospital. The lack of certainty about my future,our future, terrifies me. I keep remembering that I’ll be nearly 30 come thenext general election.

Charlotte Church was there, placard in hand. Whilstthe term ‘Champagne Socialist’ has been bandied about on Twitter, I like her.She was genuine and passionate. (Click the video on the right to hear myinterview with her. Also see the links at the bottom of this article forfootage of the march and to hear an interview with Peter Edwards from theSocialist Workers Party).

The wellbeing of the most vulnerable is underthreat under the Tories. Sound dramatic? The cuts have already started andCameron hasn’t even finished organising his cabinet yet: http://www.independent.co.uk/news/uk/politics/generalelection/hours-after-the-election-the-dwp-says-it-is-looking-to-cut-a-disabled-access-to-work-scheme-10237191.html.

People died under the coalition and now the Tories have no one to answer to.Click here http://i100.independent.co.uk/article/7-laws-the-lib-dems-stopped-the-tories-from-passing–gkKwqOshgbto see the 7 laws the Lib Dems stopped the Tories from passing.

Buzzwords such as ‘lawless’ ‘mob’ and ‘yobs’ arebeing used by the right-wing media to undermine the efforts of peopleprotesting against the Tory government that 63% of us didn’t even vote for.Indeed, the mainstream media only bothered to report on the protests when’criminal damage’ had occurred, arrests had been made, and police officers hadbeen injured. Protestors were also injured, and there have been many reportedcases of police brutality – but where is the mainstream coverage of that?

Voting is not the only way to make our voicesheard. There are many demonstrations and meetings happening soon. See the linksbelow for more info:

National (UK) Demonstration: End austerity nowPeople’s Assembly Against Austerity Saturday 20th June, 12pm Bank of England,London (Buses are being arranged from Cardiff for anyone without transport thatwants to attend the event) https://www.facebook.com/events/460624807433119/

Footage of the march: https://www.youtube.com/watch?v=Rmau-N-PJG0

Info > Law And Rights > Your Rights