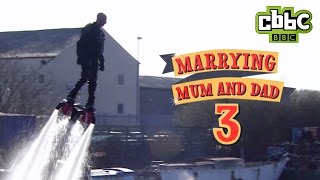 What would you plan for your parents if you had to organise their wedding? ‘Marrying Mum and Dad’ is a show on CBBC where the kids plan and organise the wedding for their parents without telling them what’s involved. Pretty crazy, right? I managed to talk to the presenter, Naomi Wilkinson, to chat about the show.

Could you tell us the basic idea of the show ‘Marrying Mum and Dad’ for those who aren’t sure?
It’s a show where the kids take control of organising their parents’ weddings. They have to sort out the theme, a venue, the outfits, some transport, the cake and the entertainment, and all in the space of about 2-3 weeks!

Are there any rules that the kids or the parents have to follow?
Yes, obviously the kids have to promise to not tell their parents anything about their plans, which as you can imagine is a pretty big ask. And the parents have to promise at the start of the show that they will allow their children to completely and utterly organise their wedding and that they will have no say whatsoever!

What’s the weirdest wedding plan the kids have come up with?
We have had quite a number of weird ones, in fact they’re all bonkers! I think the Haunted House wedding where the mum and dad had to dress like Dracula and his bride and step out of coffins in a real haunted house to say their vows was perhaps one of the most bizarre.

Have any parents ever refused to follow the plans?
Thankfully not yet! Hats off to them, they have all been remarkably brave.

Has anything ever not gone to plan?
One mum in series 2 did ask one too many questions of her children and managed to find out the planned venue. So she was made to promise not to pry any further and thankfully the rest of the wedding plans were kept a complete secret.

Have the children ever surprised you in any way?
They all surprise me every step of the way. The ideas they come up with are so brilliantly out there, their passion and commitment to creating a day that their parents will never forget is highly commendable and the way they handle the vast mix of emotions that are involved on the big day makes me so proud of them all.

What would you say was the most romantic wedding that has taken place on the show?
Probably our first wedding abroad. We took the couple to the city of love, Paris, where they had an emotional surprise when they discovered that all their friends and family had been flown out too, some of whom they hadn’t seen in a really long time. Then they got married on a boat right under the Eiffel Tower, it doesn’t get much more romantic than that.

Are there any funny stories that you can tell us about that we didn’t get to see on camera?
We custard pied a bride! It was during our circus wedding and the kids decided it was what they really wanted to do, so they did it! Sadly it didn’t make it in to the final episode, but what a great sport their mum was.

What can we expect from this series?
This series has been so exciting for us not least because we managed to pull off that first ever wedding abroad. The kids have been upping the ante for all the mums and dads, really testing their nerve…making a dad with a fear of heights fly board and take on a zip wire, getting a couple married wearing school uniform and even having a couple learn to scuba dive from scratch on the morning of their big day in order to get married underwater!

Catch ‘Marrying Mum and Dad’ airs weekdays at 9am on CBBC.

Naomi also co-presents ‘Wild’ which is back on September the 13th at 9am on CBBC. For news and updates follow Naomi on twitter: @Naomi_Wilkinson

Related Article: The Wedding Of The Year