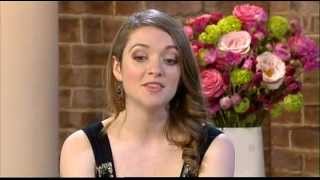 Dr Emer O’Toole is an academic, writer and hairy feminist, currently working on her first book, Girls Will Be Girls, which is out next year.

As it was Armpits4August last month, I thought now would be the perfect time to catch up with Emer and find out if not shaving gets any easier.

Wicid: Do you still face prejudice due to your decision to stop shaving?

Emer: Sure – it can present challenges. Strangers give me funny looks sometimes. I gave a radio interview to a really nasty BBC Four Counties presenter once, who wouldn’t talk seriously about the pressure on women to conform to arbitrary beauty standards, and just went on about how disgusted he’d be if he saw me in a swimsuit. Live on Air. That was a horrible experience. Once, I was on the tube, and a group of four girls opposite me were speaking Irish or Gaeilge, which I speak well. My ears pricked up to hear the language, and I was about to say hi and ask where they were from, when they started talking about the hair on my legs, thinking, of course, that I couldn’t understand. Afterwards, I thought of all the smart things I could have done, like told them in perfect Connemara Irish to enjoy their time in London just as I got off the train. But I didn’t, I just sat there feeling kind of upset, because I’d been so happy to hear the language, then so bummed to hear what they were saying. I was seeing a guy a little while ago, who communicated honestly and openly that he found the hair on my legs difficult to deal with (although he was fine with my armpits, strangely). This doesn’t count as prejudice, of course, but it was a challenge, because I liked him and wanted him to find me attractive. But he wasn’t the right dude for me in lots of ways, and his inability to break down his socially conditioned expectations of how women are supposed to look was probably a sign of that, or maybe a part of that.

All this said, being at one with my woman fuzz gets easier all the time. Friends, family and work colleagues are cool and supportive. The lovers in my life find me attractive because I’m me, not because of how closely I resemble a societal ideal of femininity. Strangers still stare of course, and sometimes comment, but I’m just so much more comfortable in my own skin now that it doesn’t bother me. If anything, it gives me more confidence and more courage – because, just like men, women grow hair on their legs and under their arms, and I am very proud that I’m no longer ashamed of mine.

Wicid: What advice would you give someone who is questioning why they shave?

Emer: It’s great that you’re questioning. We need to question. Because if we don’t stop to question, we just continue to pass down to our children the shame and embarrassment of our bodies that our elders passed down to us. So my only advice to someone who is thinking about all of this stuff, is to keep thinking. And don’t let anyone tell you that questioning the social imperative to shave is trivial, because, in this world of eating disorders, plastic surgery, and women being represented and judged primarily in terms of their conformity to a restrictive, damaging, modified, and increasingly unrealistic beauty standard, questioning why you have been taught to believe that your body hair is disgusting is anything but trivial.

Wicid: How did you become a feminist?

Emer: Slowly, over time. I was an egalitarian first, which means that I believe all people – men, women, working class, middle class, black, white, straight, queer – are equal, and deserve equal rights and opportunities. When I was younger, I didn’t identify as a feminist. Before I went to university I had never heard the term ‘feminism’ uttered in a positive context. This didn’t mean that I didn’t care about gender equality – it just meant that a) I believed the very successfully propagated lie that gender equality had been achieved and thus feminism was outdated, b) I’d learned from the mainstream culture around me that feminism was a bad thing and had accepted this without adequately questioning it and c) I had no awareness of the social, political, cultural and economic problems that modern feminists continue to try to resolve. For me at 20, gender inequality was something women in Saudi Arabia experienced. I never perceived myself to have experienced any discrimination, so, therefore, I didn’t believe it existed. I wasn’t able to see the bigger picture – that although I, personally, didn’t feel discriminated against, I was part of a most unequal society. So, when I hear people say ‘I’m not a feminist,’ I can understand where they’re coming from. I used to say it myself.

I became a feminist when experience and study of the social world opened my eyes to women’s lack of representation in positions of power, to their unpaid and under-appreciated domestic labour, to the lack of provision for working parents (which, due to tradition, affects women more than men), to harassment, to assault, to media representation of women, and to the ‘beauty myth,’ which places women (and increasingly men) under physical and psychological distress, and allows them to be valued in terms of what they look like instead of who they are and what they have achieved.

Wicid: Who is your role model, and why?

Emer: My role model is Mary Robinson, the first female president of Ireland, and former UN commissioner of human rights. Mary Robinson was a barrister before she entered politics and diplomacy, and, in a most sexist and discriminatory environment, she pushed forward important and lasting social change through taking the Irish government to the European Court over issues such as divorce, contraception and homosexuality (all of which were illegal in Ireland at the time). She fundamentally changed the face of the Republic of Ireland, and she did so bravely, in the face of much hostility from conservative factions, who told lies about her, and tried to paint her as a bad mother and un-natural woman because of her professional and political ambitions. She was an incredible president, building bridges between Protestant and Catholic communities, between those from the North and the Republic, reaching out a hand to the travelling community, to the gay community, and to the emigrant Irish. In her work as UN human rights commissioner, she worked with compassion, humanity, honesty and an unwavering commitment to fairness and justice. I’ll never be the woman she is, but she is a huge inspiration. I’m so glad that she was president when I was a little girl.

Wicid: Do you have any advice for new writers just starting out?

Emer: Okay, it’s not actually my advice. It’s Margaret Atwood’s advice. But I took it, and it worked for me. Ready: ‘Read Write Read Write Read Write.’
Another thing I always tell people is to contribute to group blogs and other online publications that you believe in. Do it for free. Build your portfolio of published works. Build your skill engaging with public. Find your voice.

Wicid: Your first book, Girls Will Be Girls, is coming out next year. What can you tell me about it?

Emer: Um, that I’m supposed to be writing Chapter 5 at the moment, and I’m still on Chapter 3?

But, besides that, Girls Will Be Girls is a personal and playful journey through the ways that we learn to ‘perform’ our gendered identities, and through ways we can perform differently. I’m loving writing it, and I hope that it’ll touch people.

Wicid: And finally, what does the perfect society look like?

1. The perfect society is based on the principles that all people are equal, should be safe from harm, and should have equal rights and equal access to opportunity.

2. There are approximately twelfty billion different ways of understanding and living according to these principles, and so people should be free to choose how to live so long as they don’t harm others, deny them rights, or deny them fair access to opportunity. This means that we all have to tolerate ways of living that we don’t necessarily agree with, but also that we can live as we choose, and that we have a right to intervene in the lives of others when people are being discriminated against or harmed.

3. Even if everyone agrees to these principles, and understands that they can be interpreted differently, there will still be points of contention. For example, at the moment only 1 in 5 MP’s are female. For me, this clearly represents unfair access to opportunity for women, and I am in favour of measures (such as gender quotas) to provide fair access to political opportunity. For others, this does not represent unfair access to opportunity, but the individual choices, merit and actions of men and women in the political realm; these people believe that gender quotas would represent unfair access to opportunities for men. In situations like these, another principle can be applied. Who is the least advantaged by the current state of affairs? (In this case, clearly women). As a guideline, this perspective is the one that should be privileged as solutions are sought.

This idea of a ‘perfect’ society in indebted to the political thought of John Rawls.

Wicid: Thanks for your time today, I wish you the best of luck with the book launch!