Home » News » Things To Do » Interview With Gabriella Jones 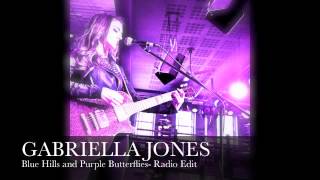 Wicid: Hi, Gabriella! You’ve achieved an awful lot in 19 years! Could you tell us how you first got into becoming a musician?

Gabriella: From a young age I’d always loved singing. I started writing songs and playing the guitar when I was eight then when I was 13 I started performing at local open mic nights to gain a bit of experience and to see what people made of my original material. It was really fun and great for testing out new songs. Since then I’ve been lucky enough to play at the Wireless and Hard Rock Calling Festivals in Hyde Park, the Isle of Wight Festival and most recently at the LG Forum Live before Beyonce‘s show! It’s been really exciting for more and more people to hear my music.

How would you describe your musical background?

I’ve grown up listening to a mix of old blues/rock and pop music which I think has influenced my writing style a lot. It’s all happened very naturally and I think my song writing is definitely changing as I get older and have more experiences.

Who in the music industry influences you?

I love Free and Led Zeppelin for the bluesy vocals and then also bands like Paramore for a more punchy rock style. I think singers like Beyonce and Christina Aguilera also influenced me a lot as they really know how to put on a show but are also great stripped back.

Lyric-wise I try and do what a lot of artists suggest…write about what you know. All my songs are inspired by my life experiences and it often feels a bit like reading my diary aloud in front of a lot of people but it’s really therapeutic and I think a lot of people can relate to music when it’s honest. I love John Mayer’s lyric style and also Alanis Morrisette.’You Oughta Know’ is one of my favourites.

You’ve opened for the Queen of Pop, BeyoncÃ©! Not many people can put that on their CV! How did that come about?

It was definitely one of the most exciting gigs I’ve done! The buzz around her tour was amazing and I had a lot of radio and TV interviews to do as well as doing my university exams which was all a bit crazy. I met Ben Drummond – who picks the acts for the LG Forum Live – whilst walking my dog, Hendrix, at the park. After calling after Hendrix, who was being a bit of a naughty pup, Ben asked why I’d chosen that name and if I was into music, I told him that I sang and played the guitar. Since then he’s been a massive supporter of my music and asked me to play before the Beyonce show along with Bryan Adams, The Killers and Roxy Music. Dog walking is a good thing!

What five things that you’ve accomplished are ones you can look back on and be extremely proud?

Along with the Wireless Festival and Isle of Wight Festival I think playing at Hard Rock Calling has to be one of my favourite memories. It was such a great moment and the crowd was just brilliant. I had two guys come up to me later on in the day saying ‘Blue Hills and Purple Butterflies’ made them cry! So surreal. Most recently I’ve been made Patron of Breakthrough Breast Cancer West Midlands which is a charity very close to my heart. I’m aiming to reach a younger audience in order to spread their TLC message (Touch Look Check) and make people aware of the things they can do to reduce the risk of having breast cancer. It was really cool to have my tracks played on the radio and to perform ‘Blue Hills’ live on TV. All these things have been really exciting.

You have a new single out at the end of this month. What can you tell us about that?

It’s called ‘Losing My Baby’ and it comes out on the 28th October on iTunes. I’m really excited for people to hear it. I recorded it in London with John McLaughlin – who produced the track – and it’s a really fun one to play live with my band. It’s not a typical break up song, it’s more about the confusion in the middle of a relationship and you’re not quite sure what’s happening. Although it seems difficult at the time it’s quite an interesting emotion to explore in terms of songwriting and I hope it’s a song people can relate to.

If you were to put on your own festival, what artists and bands would you have headline and perform?

I’d love to see Prince headline a show (and maybe do a duet…a girl can dream!) and Jay-Z and Slash, and for a more rock vibe, one of my favourite bands is Paramore so it would be cool to have them on.

What’s next for you?

I’m really looking forward to performing the new tracks live and seeing what people make of my music. It would be great to do some more festivals with my band. Follow me on Twitter @gabriellajjones and Facebook for the latest updates!

Where do you hope to be in five years time?

And finally, what advice would you give to young people who want to follow your path?

Write about what you know and what you love…do it because you enjoy it! And also to listen to all kinds of music, no matter what genre, because it may surprise you what and where you can get inspiration from.

Related Article: The Next Big Thing In Music – Gabriella Jones