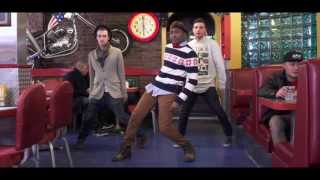 Lukay is a Chozen Stars Records/EMI Music Canada artist who has a pop/R&B/house flavour. He’s been nominated for a JUNO Award and has performed with acts such as Trey Songz and Boyz II Men. He’s also worked with Grammy Award winning artist, Dark Child, as well as writing the track ‘Yalla Habibi’ for Karl Wolf, which became Number 1 on the Chart on iTunes.

We caught up with Lukay and asked him a few questions about his new single, his plans for an album and a tour and one of his other passions – dance.

Wicid: Hi, Lukay! Your new single, ‘Dance With You’, is being released. Now, I’m guessing this song is about dancing. How would you describe ‘Dance With You’ – and your own sound in general – to the casual viewer?

–         That is correct, ‘Dance With You’ is now available worldwide on iTunes as well as other online digital stores. The song is definitely about dancing, but with a special someone. If you listen to the lyrics or watch the music video you will notice that the guy notices a girl, and starts to chase the girl around town. The girl plays hard to get at first, but ends up dancing with him at the end of the music video. I guess the best way to describe my sound is R&B pop with a bit of funk and soul. But, honestly, when I make music I have no boundaries, meaning I don’t limit myself to a specific genre. I can go from making a pop song, to dance, to a R&B song, or to a rock song.

Wicid: You dance quite a lot in the video. Do you feel the dancing brings another level to the music to make it more accessible or popularâ€¦or do you just like dancing?

–         Honestly, I never really viewed dancing as a tool to make the music more popular although many music videos are famous for the dancing. I just love dancing in general, and if the public ends up loving the song even more, then it’s definitely a plus. But the main motive for me dancing in my music videos is simply because dance is another passion of mine.

Wicid: You recently toured with Boyz II Men, how did it feel having a comparatively ‘old’ and established act and an ‘upcoming’ act performing together?

–         I have to say that it was definitely a blessing and a highlight of my life that I’ll never forget. Not only because they’re one if – if not the – biggest R&B group of all time but because I grew up listening to these guys and, most of all, they’re humble and have a great spirit.

Wicid: What’s the best song ever?

–         My best song ever is hard to say because I have many favourites for many reasons. But, if I had to name one of my favourites, I would say ‘Human Nature’ by Michael Jackson.

Wicid: You dance in a canteen, a bus and a cinema in your video. Do you make a habit of dancing in public places with random women?

–         It’s not so much that I enjoy dancing in public places, it’s more me being creative and trying new things, trying things that most people wouldn’t dare try. Whenever I do a music video, I try to make visuals reflect the song in a realistic way but at the same time in a cool, creative way.

Wicid: Who is the biggest R&B singer in the world?

–         I would have to give it to Usher or Justin Timberlake. They both accomplished a lot over the years, in terms of album sales and winning numerous awards.

Wicid: Where do you see yourself in 10 years? (Older is not an answer.)

–         Millions of albums sold worldwide, numerous awards, active in the film industry, and running my own record label.

Wicid: You sport everything from a bow tie to a woolly cardigan in your video; what’s your signature ‘look’?

– I like to be diverse and really just try new things, however you may often see me with a beret similar to the one I wore in my ‘Dance With You’ music video.