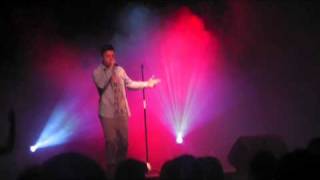 We previously discussed about the evening of the Rawr magazine launch and mentioned how we interviewed Tom Richards who was in last year’s season of the X Factor. We did record the interview on camera but unfortunately something went wrong, so we don’t have the footage for you, but we do have the interview here for you to read!

On 23rd March 2011, those who were involved in the Rawr magazine project gathered in the Muni Arts Centre, Pontypridd to attend the launch ceremony. It was an exciting and fun-filled night, enhanced by the performance of the local celebrity, Tom Richards, who got as far as the judges houses in the seventh series of the X Factor.

Tom gave a short performance consisting of a cover of ‘Fire with Fire’ by the Scissor Sisters, a cover of ‘Dakota’ by the Stereophonics, and a cover of the song ‘All Time Low’ by new pop sensation, The Wanted. Tom was utterly brilliant! I was also part of the gaggle of screaming and giggling girls who were dancing to ‘All Time Low’.

And then, the unimaginable happenedWe had the chance to interview him! Which is something we really didn’t expect to do on a Monday evening!

So, without further ado, we give you our interview with the one and only Tom Richards!

Both: We’re here today interviewing Tom Richards from the X Factor.
Vicky: I’m Vicky
Jazz: I’m Jazmin and I think you know who this is…
Tom: I’m Tom
(Laughter all round)
Vicky: So….Tom?
Tom: (smiles) So?
Vicky: Do you feel you’ve come a long way since you started on the stage of the X Factor
Tom: Yes, definitely. The amount of experience I’ve gained, even though I didn’t get through. I’ve become a winner in a way because I’ve learned a lot and am a lot better off than I was before
Jazz: Did you feel nervous when you were performing at Dannii’s house?
Tom: I think Danni Minogue’s house was the most nerve racking round, because obviously at that point in the competition you determines whether you’re going to the live shows or bag packing back home. That was the most nerve racking part of the show as it’s intense,
Two very big Australian Artists Natalie Imbruglia and Danni Minogue in front of you, and a lot of producers and cameras on the side which you don’t see on telly, so it’s even more intimidating. So yeah, I did break a sweat.
Vicky: Is Simon Cowell really that scary in person?
Tom: (Laughs) No, Simon Cowell isn’t. It’s just a character he has for television. You know people love him, people hate him. It’s just an act.
Jazz: What made you want to audition for the X factor in the first place?
Tom: One, it’s a way of becoming famous over night (laughs) I like the publicity. I do enjoy it. Number two, I have no knowledge in the music industry here, and obviously if you’re in front of 12.5 million people on a Saturday night, somebody’s bound to see you. So I was wanting someone to come pick me up, and say, you know, Happy days. (Laughs)
Vicky: So how did it feel performing on the Stage and the house, and all of it?
Tom: Well the biggest buzz I’d say was boot camp, because we were there for a week, got to meet everyone, I made a lot of friends, but because you didn’t know anyone there, and you’re listening to all these voices, watching people audition, you thought, oh, there’s a bit of competition there. So the biggest audition for me and what I enjoyed the most was boot camp as I was so determined to do well.
Jazz: You said you made friends there, do you still keep in touch or have you lost contact?
Tom: Erm, I do keep in touch over Facebook and twittering and now and again I’ll have a text or two you know,
I bothered a lot with Diva Fever, because they were so opposite to me and such a good laugh, I had a good bond with them. I bothered with the One Direction boys and spent a lot of time in Australia with Matt, so we do try to speak but it’s very limited because everyone’s so busy.
Vicky: Who did you want to win? Wagner?
Tom: I did vote for Wagner actually. I met the guy, I met and spoke to him in boot camp and he was a really genuine guy. I think everyone taking hatred on him on television was unfair, because at the end of the day, he’s on there to get as far, he is just as worthy as position on there as anyone else.
I did like Rebecca, but I didn’t know Rebecca as she was in a different category to me, I was rooting for the One Direction boys, but when it came to the final I wanted Rebecca to win as she’s different.
Jazz: What advice would you give to young people who want a career in the music Industry?
Tom: Ah, to be in the music industry or on the X Factor? As for the X Factor. Go down to the auditions for the experience. Just look at it as an experience and a day out. The amount of people I met in the first day of being there I wouldn’t meet in a lifetime, the amount of characters and personalities. And you meet a lot of people, nasty people who think they’re better than who they are, and you meet really nice people, down to earth. So anyone out there auditioning who wants to audition for the X factor (nods and smiles to camera) just take it as an experience, and if you get far, or if you get as far as I did, *laughs* no i didn’t mean it like that. I never dreamed of being at the judges houses. If you do get that far or if you do get to the live shows it’s a bonus.
For anyone wanting to make it in this industry, keep plugging away, no matter how many people doubt you, and tell you you’re crap, you’ve got a fan base. You make a fan base because you can’t please everyone in this world, so just keep plugging away and you’ll achieve your goal.
Jazz: What do you see yourself doing in the next 10 years?
I’m looking to do a lot of gigs. Gigging here and there, getting my face out there, and having people here my name Tom Richards after the X Factor.
But song writing is a big part of my time at the moment. I’m writing with a guy called Gwyn Jones and doing a lot of writing songs, producing. Hopefully gonna be having a mini record contract deal with A Capella studios which is up in Pentyrch, they’re a record label. If it doesn’t all come off then I’ll most probably go back to the X Factor again, but yeah I don’t know, we’ll see.
Vicky and Jazz: Thank you. Here’s a Wicid.tv key ring for you. Say hello to Wicid
Tom: Hello Wicid, you’ve been great! No… That sounded cheesy! *Laughs*

This article was also written by Toriabeth!