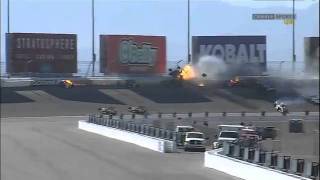 Scheckter was a spectator at Sunday’s Las Vegas Indy 300 and had an anxious wait before discovering son Tomas had escaped unharmed from the 15-car crash.

Unfortunatly, Dan Wheldone was not so fortunate and was taken to hospital and later died!

On Sunday, it happened to one of IndyCar’s biggest and most popular stars.

Two-time Indianapolis 500 winner Dan Wheldon died after his car became ensnared in a fiery 15-car pileup, flew over another vehicle and hit the catch fence just outside turn 2 in a season-ending race at Las Vegas Motor Speedway.

After reading this, I would be most grateful if you could take just 1 minute to show your respect!