Home » News » Education, Employment & Training » Kelvin Doe, 15, Is The Next Big Inventor Of Our Generation 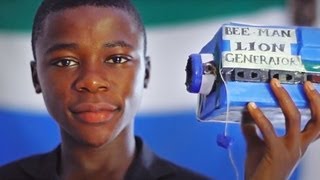 In Sierra Leone,West Africa, the lights may come on once in aweek, with the rest of the month, dark. So, Kelvin Doe made his own battery topower lights in people’s houses from recycled parts he found in the trash. Healso made his own FM radio transmitter and a generator to power it so that hecan give voice to the youth in his country. David Sengeh discovered Kelvin atan innovation camp he runs in Sierra Leone and invited Kelvin to M.I.T. (MassachusettsInstitute of Technology), where David is a PhD student in the Media Lab.

Just as Kelvin’s world is expanded by working in the MediaLab, the researchers there had their world expanded by interacting with Kelvin.

Check out the awesome video below to see Kelvin in actionand to see how he’s influenced the researchers at the world-renowned M.I.T.

Forany of you out there who are budding inventors, Kelvin’s story might just bethe motivation you’ve been looking for.