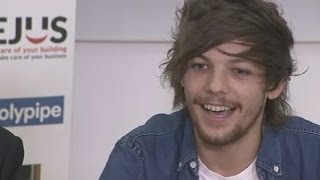 The singer has officially gained ownership of Doncaster Rovers Football Club as of last month and is hoping to make big and positive changes within the club.

Previous owners, Terry Bramall, Dick Watson and David Blunt have announced that contracts have now been exchanged as of 18th June for Louis and John Ryan to assume new ownership of Doncaster Rovers, Doncaster RLFC and the foundation.

Speaking about this great achievement,Tomlinson said: “Although I’m young, I am very ambitious and I really want this club to succeed.

“All that’s in it for me is to be a part of something great and I think we can really do that here at Doncaster Rovers.

“Doncaster is a footballing town and it would be great to continue that feeling throughout the town.

“This is a massive step for me. I want to keep my feet on the ground but I’m really excited and just want the club to succeed.

“Me and John have talked a lot about the football club, he’s a very successful business man. We have a good relationship and I think it will be a great partnership.”

Louis and John Ryan, businessman and previous Chairman of Doncaster Rovers, have launched a crowd funding campaign with Crowdfunder enabled to support Doncaster Rovers Football Club, aiming to make £2 million in order to support their ambitions.

Besides his singing dreams, Louis has always had a passion for football and this is something incredible for him to be able to partake in. However, don’t fret at the thought of Louis abandoning 1D just yet. He wants Directioners to get involved with the crowdfunder, too!

“One Direction’s Louis Tomlinson and former Chairman John Ryan have teamed up to create an ambitious new Trust at Doncaster Rovers Football Club. Doncaster born-and-bred, the lifelong fans now have the opportunity to secure the future of ‘Donny’ and take the club to the next level. To do that they have a big idea: to bring together football, music and crowdfunding fans through Crowdfunder to do something quite special in the South Yorkshire community they were brought up in,” is what is stated on the Crowdfunder site.

Louis and those at Donny Rovers obviously know how powerful Directioners can be and therefore have created exclusive reward packages for those who pledge. An example of this is pledging £10 will entitle you to a “Thank You” video from Louis or an exclusive wristband with Louis’ squad number ’28’ on it. Or if you pledge £25 or more, you join “Club 28â€³ with an exclusive t-shirt featuring Louis’ squad number. The more you pledge – the better rewards you get. Pretty cool if you’re a dedicated fan, right?