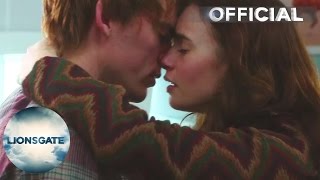 So, Monday was a very big day for me. I packed up my bags and headed to London. No, not permanently, but just for 24 hours or so. It was the world film premiere for the new British rom-com, Love, Rosie and yours truly managed to get two tickets! How crazy is that?

The journey to London was rather a nuisance. From the bus being late, to extreme lack of hygiene on the bus toilet and then a blown tyre as we drove through Earl’s Court to Victoria, it made our journey longer. I’ll admit, I’m very disappointed in Megabus for the amount of problems we came across but it also came as a surprise as normally the service is pretty good.

Trundling from our broken down vehicle, we headed to Earl’s Court station to catch a tube to Leicester Square. It was at this point my excitement could hardly be contained – so many famous films had premieres here. From Harry Potter to the ‘One Direction’ rockumentary and so on, it was a real thrill to think that one of my lifelong dreams of attending a world premiere was finally happening and right at the heart of movie premieres. It gave me chills.

After waiting around for the event to begin and spending some time around the square to kill time, it was finally time for the premiere. My dad and I, along with many others, waited patiently for the last of the carpet preparations to wrap up before the glitz and glamour began. I was in awe of everything happening in front of me. The stars, the paparazzi, the music, the lights, everything was just so surreal. I was in touching distance of celebrities. Celebrities and movie stars who people from all over the world would have probably sold their souls to, to be in such close distance to them. And there I was, the little valleys girl who travelled all day to get to this moment. It was insane.

I was lapping up every moment until suddenly a familiar name was being called.

“Tanya! Tanya! Over here Tanya! Let’s get some pictures Tanya!”

I mentally shook my head to wake up from the daydream I was living in to wake up to reality. A petite woman in a gorgeous blue dress was walking right in front of my own eyes. Tanya Burr is one of my all time favourite YouTubers and there she was, standing just inches from me. I was slightly shocked but so excited to actually be so close to her. What was I to say? Did I get a photo? Did I say how much I liked her videos or was that too fangirl-y for me to do? Oh God, there she is. Now or never Jazz, move it or lose it.

“TANYA! OVER HERE PLEASE!” an obnoxious photographer interrupted. Okay, maybe not obnoxious – it’s his job after all, but it was loud and my meek voice couldn’t be heard. Tanya’s publicist walked her to the centre of the red carpet. Goddammit, Jazz, you missed, you idiot. At least I had photos of her standing right in front of me, though. That’s proof of how close I was to her and the other stars.

I sighed and thought it was best if I just avoided anymore disappointment and try to enter the cinema as the film was due to start within a quarter of an hour. I proceeded to pick up my bag and get ready to leave.

I looked up to see none other than Tanya’s fiancee and fellow YouTuber, Jim Chapman. Of course, I’m also a fan of his YouTube channel and I couldn’t believe my luck. He was interacting with the crowd. This was my chance. As he walked towards me I was so excited, but by now two other fans had pushed passed me. I couldn’t complain, they wouldn’t have understood as they didn’t speak English. I mentally sighed before standing on my tiptoes  and calling out, “Jim, please could I get a photo?”

Without even having to think about my actions, I stretched my arm to pass over my phone which I quickly put onto front facing camera as he took it from my hand and posed quickly for two photos which he took of us before handing my phone back and smiling as he said, “there you go,” before heading off after his fiance to go into the cinema.

I’d be lying if I say I don’t get a little bit starstruck, but I do. However, I did manage to keep my cool in front of the starlet in question. Once Jim had left, I turned around to my dad who was smiling a toothy grin as I quietly squeaked before rhetorically asking, “Did you see that?! Jim Chapman! I met Jim Chapman!”

That was pretty much the highlight of my night and although the main stars walked in front of me and I quickly snapped shots of them before heading onto the carpet myself to enter the cinema, it was Jim and Tanya who made the event extra special for me.

The film was amazing. From the trailers I had previously seen, I had a feeling it was going to be entertaining but it exceeded my expectations and I thoroughly enjoyed watching every moment. It was funny, emotional and just such a good watch. I do plan on reviewing it in the near future, but if you’re looking for a tear-jerker, this film brought my heavily tattooed hard-man of a dad to tears, so I highly recommend you go to see Love, Rosie when it comes out in cinemas across the UK on October 22nd.