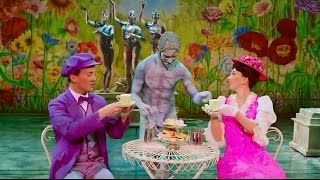 When the cat has got your tongue there’s no need for despair, just get yourself to the WMC and you’ll have treats for spare – Mary Poppins is a triumph of sound and stage – it’s the biggest show, you’ll ever know, and this is how it goes!

Disney and Cameron Mackintosh present their brand new production of Mary Poppins (starring Zizi Strallen in the title role) to Welsh audiences; with all the flair of a massive West-end production, from the heart of Cardiff Bay, the Wales Millennium Centre.

The Walt Disney masterpiece that is the 1964 film Mary Poppins has continued to captivate the public’s imagination. The story follows the adventures of the: “practically perfect in every way” nanny, Mary Poppins, with the Banks family of Number 17 Cherry Tree Lane. The lasting popularity of the franchise explains the ecstatic reaction to potential Tim Burton re-boot that were later dismissed as a hoax, and the eventual confirmation by Disney of a sequel Mary Poppins Returns starring Emily Blunt (due for release in 2018). Not to mention the critical acclaim of the expository prequel Saving Mr Banks (2013). It is no small feat to take on the task of breathing new life into an iconic franchise or such a much-loved character.

Mackintosh originally acquired the rights to develop a stage adaptation in 1993 from the author, P.L Travers, and in 2001 met to discuss collaboration with Disney so that they could incorporate the songs. The original production which ran for six years and 2,619 performances, won a Tony Award for Best Scenic Design and Two Olivier’s, including one for Best Choreography.

None of this has changed in this truly all-singing, all-dancing performance that draws focus and wraps the audience up in the fantastical wonder that is the world of Mary Poppins! The Donald Gordon theatre within the WMC has been transformed and transported back in time to the iconic, Edwardian-era London we all fondly recognise from stage and screen – top hats and canes, cobble-stone pavements by candle-lit streetlamps, and ladies in hobble skirts tottering around the centre of the industrial revolution – igniting the nostalgia of what seems like a different world to this generation. The sets are visually stunning – the greatest I have ever seen in a stage production – no effort has been spared in creating a truly interactive experience with rooms literally unfolding like the pages of a book from the back of the stage. The lights turn on with a click, the kitchen table snaps back to life and the statues pirouette from their columns!

I am thoroughly, unmistakably a Disney fan; and Mary Poppins is a firm, personal, Top 5 favourite for me, however I have to admit that I have not read the original books and the stage production differs substantially from the film with many scenes from the film missing or altered (such as a shortened “Jolly Holiday” sequence) and new scenes and characters all-together; including, for example, a love-able, dancing statue named Neleus (Yves Adang), and the creator of words, the excitably, larger-than-life, Mrs Corry (Wreh-Asha Walton). As I’m writing this I also find that I’m humming away the tune to new addition: “Practically Perfect”.

Thankfully the characters we all love; including Jack-of-all-trades, Bert (Matt Lee), and the overtaxed and erratic family cook, Mrs Brill (Wendy Ferguson) remain. Matt Lee, for me, embodied joy and the sort of, happy-go-lucky attitude that gets a chap far in life, while Ferguson received some of the most unfettered laughter of the whole performance due to her wired temperament and passive-aggressive retorts; as well as her on-stage antics with the butler, Robertson (Blair Anderson). Then there were: “Two adorable children”, Jane and Michael Banks, who the audience instantly developed a soft spot for. They confidently played out their interpretations of middle-class, cheeky, mischievous children who underneath it all are very-well behaved but craving of attention from their father; not to mention, they have one of the cutest songs ever written in the form of: “The Perfect Nanny”. A more subtle, adult tone of the piece was Mrs Banks’ (Rebecca Lock) own longing for attention and recognition from her husband of her talents; and the individualism she has lost through marriage, which is vocalised in her beautiful solo: “Being Mrs Banks”. This show was more than fun, high-energy and childhood glee because “Mary Poppins” is more. Her creator, Author. P.L Travers, was heavily resistant to having her books adapted to film and stage from fear that they lose some of their substance or morals. The story also explores the class systems and the need for compassion;  which culminates in the beautiful ballad

This show was more than fun, high-energy and childhood glee because “Mary Poppins” is more. Her creator, Author. P.L Travers, was heavily resistant to having her books adapted to film and stage from fear that they lose some of their substance or morals. The story also explores the class systems and the need for compassion;  which culminates in the beautiful ballad “Feed the Birds” sung by the Bird Woman (Grainne Renihan), a song which was claimed to be a personal favourite of Walt Disney himself.

My two favourite moments of the show were “Supercalifragilisticexpialidocious” and “Step In Time” which combined complex choreography, exciting light displays, moving sets, technically uplifting harmonies, and an exaggerated frivolity and sense of fun that ignited a spark with the audience who all clapped along. I would say that we attempted to sing, but the cast raised “Supercalifragilisticexpialidocious” to such a level of precision and originality that it was difficult to keep up! If I have to confess one disappointment it would be that there were no tea parties on the ceiling… but I suppose you can’t win them all!

This production is so technically perfect – the movement, the flawless transitions and the consistent, quality delivery – it was hard not to notice how practically perfect it is, which at times took a bit of the fun out of it and made it feel serious and worthy of respect (which of course it is). But, happiness does bloom all around her and you cannot be sad for long during this show. I saw children enjoy the classic songs, fantastic colours and costumes, and I’m sure that the adults were doubly entertained with the more subtle jokes, the nod to the traps of parenthood, jobs, housekeeping, and the struggle of the classes; albeit delivered in a comedic, thoroughly entertaining way. Consequently, I imagine that being a part of this production and working under Mackintosh’s direction would be incredibly rewarding and up-lifting for any actor involved due to the level of technical skill and discipline that was demonstrated.

As a 23 year old I thought that it would be beneficial to get a younger perspective so I took my 11 year old sister who is less enthusiastic about musicals and Disney than myself, but she did enjoy it: “It’s the best show I’ve seen, Martyn” was her concise review!

In summary, the Mackintosh production of Mary Poppins contained a cast that brought the colours out of their characters and illuminated an already visually stunning set with them. For two hours we were taken to the magical London we first knew as children, packed with more songs, more kicks, and, of course, a sky full of kites.

“Mary Poppins” will be in the Wales Millennium Centre until 14th January 2017 and standing tickets have been added due to popular demand. For more information please visit their website.

UPDATE: Dick Van Dyke, the original Bert, has confirmed he will appear in the 2018 sequel with Emily Blunt: “Mary Poppins Returns”.